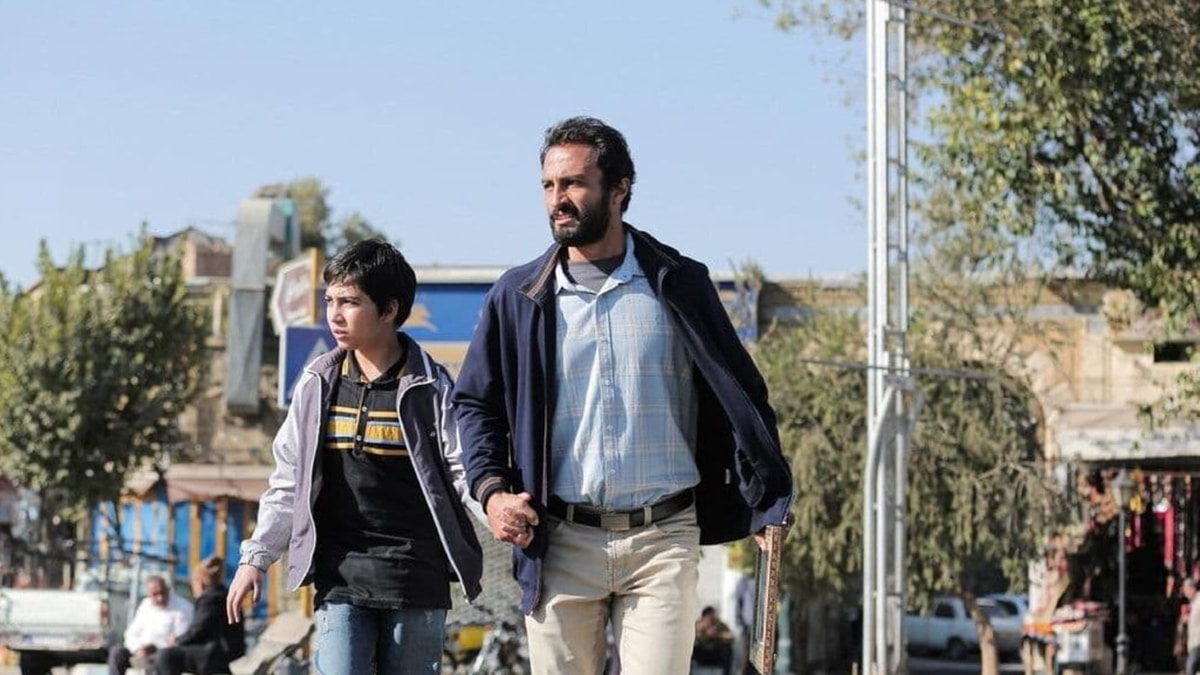 Iran’s premiere director pivots away from family stories to take a look at society at large.

In Asghar Farhadi’s A Hero, moral ambiguity runs rampant through the life of imprisoned Rahim Soltani (Amir Jadidi). Locked away for a debt he could not repay, Soltani has two days of leave to get his creditor, a family friend, to drop the charges. He owes the man a large sum, given as a pseudo-loan for a failing small business. A father to a young boy with a speech impediment, Rahim is understandably anxious to negotiate his freedom. When his girlfriend finds a lost bag filled with 17 gold coins, the moral conundrums begin, multiplying throughout the film with “nice” deeds and public interference.

The Iranian director, a known dramatist and two-time Oscar winner for 2011’s A Separation and 2016’s The Salesman, paints Soltani as a man of contradictions. He decides to find the bag’s rightful owner, only because his creditor didn’t want half of the sum; he wanted the whole thing or nothing at all. His decisions hinge on gaining favor with one person or another, manipulating his son’s stutter once the media storm follows his act of good faith.

The simplicity of Farhadi’s premise delves further into a mixture of deceit and good-heartedness, rarely swinging too far into a single direction. The prison, a local charity, his creditor, and Soltani all want something out of this ordeal. Sympathy comes and goes as this father runs around the city, hoping to save his pride and end his prison sentence, the former gaining importance as the hours continue to pass.

Farhadi constantly asks about the slim line between right and wrong, fair and unfair, justice and injustice in A Hero, never bending to give concrete answers. Jadidi’s performance further exacerbates the film’s blurry moral compass, soft smiling his way through most situations, flashing his child-like charm to each face he meets. While his son struggles through each sentence, Soltani is quick to side-step questions, answering in half-truths, told by Jadidi with an unknowing smile, hoping that his version of the truth is close enough not to warrant any suspicion.

Jadidi’s performance is one of balance and imbalance, swaying but not falling, busy but not rushing. He cares for the people around him, yes. However, despite his already-imprisoned state, he cares even more about his image, his pride, and the light in which others see him. Jadidi illustrates all of this through facial twitches and the gaze of a man who cannot decide what is best. His eyes constantly dart around, looking for people that aren’t there, for answers that won’t appear. His optimism is gentle, his hope is feeble. Jadidi gives all of that and more in one of the more subtle performances in recent years.

Whereas Farhadi has focused on familial relationships in his previous critically successful films, A Hero is more concerned with Soltani’s connection to the outside world. Though Farhadi again finds meaning in the domestic sphere through the relationship between Soltani and his son, the director centers upon society’s view of a man lacking, a man without much to show or give.

His value rises and falls with more outsider involvement, from the prison management to a local charity to members of his extended family. Soltani loses control of the situation rather quickly, ceding over his limited power to anyone willing to help him, though most of them have their own agendas. He relies on the supposed generosity of others, an unwise decision plaguing several smaller unwise decisions. It’s an indictment of a society inwardly concerned, obsessed with public perception. One that jumps at the opportunity to exploit a positive story and a downtrodden man. Then, in turn, the man exploits the story for his own gain. Farhadi hesitates to label Jadidi as a good or bad man. He exists within a much larger system of grayness, more a pawn than a major player, making rash decisions while the rest of the world controls his fate.

That’s not to say that Jadidi is blameless, nor is anyone else around him. A Hero shifts blame and sympathy with ease, deftly pushing the viewer’s mind towards each character’s point of view. It becomes murkier to discern who’s in the right, as Farhadi plays with societal assumptions. Jadidi seems to be guessing what might happen to him just as much as the audience.

The Iranian director dramatizes the most straightforward situations, creating tension within the four walls of a household, building walls around Jadidi as he travels around the city, unclear of where to go or what to do. A Hero is his best since A Separation, due to this opacity. It might hinder the audience’s view of its protagonist. Still, it makes for compelling melodrama, filled with characters itching for the audience to root for them, even as they fall further down a rabbit hole of misguided intentions and benevolent deceit.

A Hero opens in theatres and begins streaming on Amazon Prime on January 7.