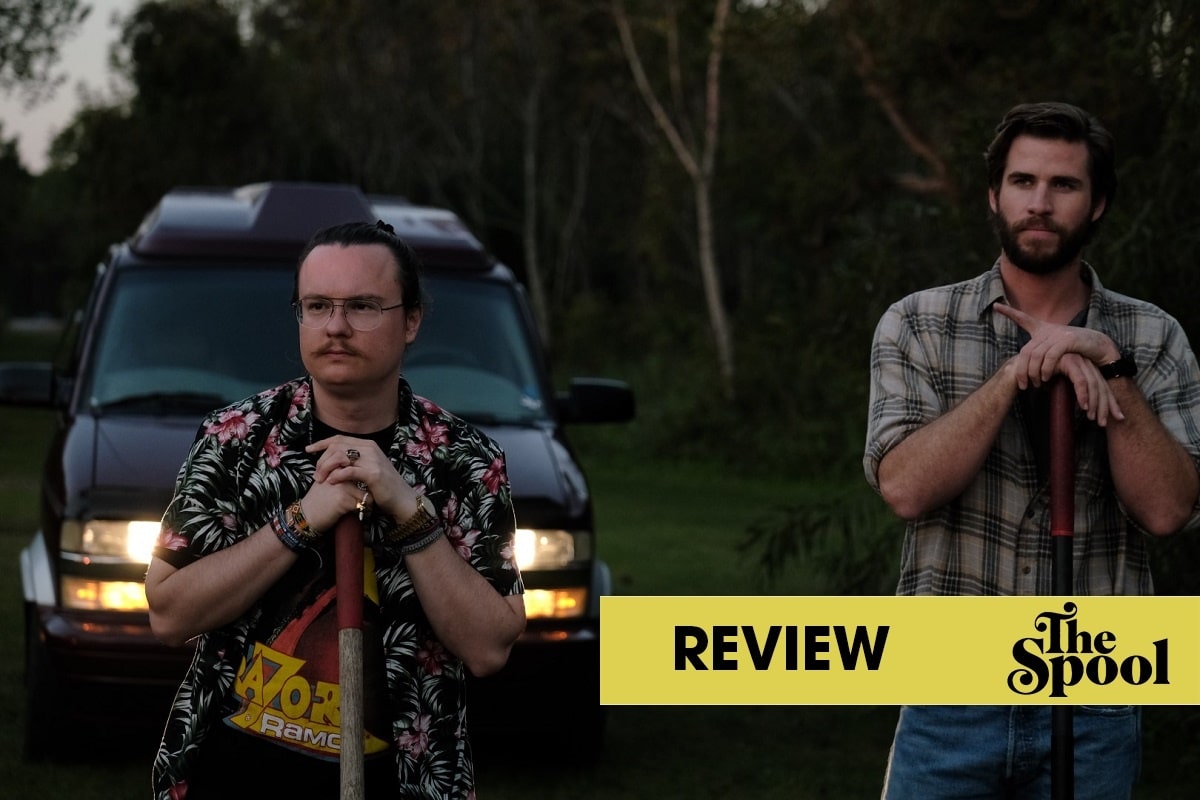 Despite a solid supporting cast, Clark Duke’s debut is a small-scale caper with that doesn’t have the attention span to ever truly work.

Early in Arkansas, Liam Hemsworth’s Kyle explains that organized crime in the south actually isn’t very organized. There are no Mafia families on the lower side of the Mason-Dixon line, just a “loose affiliation of deadbeats and scumbags.” It’s a good indicator of the movie’s own status: while clearly influenced by plenty of Scorsese and Tarantino crime capers, Arkansas operates on a far smaller scale, and it doesn’t really have its act together.

Adapted John Brandon‘s novel of the same name (making this literally pulp fiction), Arkansas comes co-written, co-starring, and directed by Clark Duke, who you may know as the third or fourth lead of the Hot Tub Time Machine movies. Duke plays “Swin,” a nerdy lowlife paired with Kyle by “Frog,” the mysterious figure positioned at the top of their drug-dealing outfit. (I won’t spoil Frog’s identity, but anyone familiar with Ebert’s “Law of Economy of Characters”will catch on quick.)

Duke gives himself plenty of time to shine here, as he plays against Hemsworth’s straight man. I’m sure Duke would call his style of comedy “dry.” I would call it not ever very funny. This actually festers into one of Arkansas’ main problems: once they screw up one of their less-than-legal “assignments,” Kyle and Swin get stuck together, but their relationship and comradery is never quite earned or justified. Plus, Kyle feels severely underwritten; we’re informed by his opening voiceover that there’s nothing he really wants, and as a result, Kyle is about as compelling as a stray doormat.

Hemsworth—whose older brothers are stubbing it through another season of Westworld and another phase of the Marvel movies—makes the most with the little he’s given. Little details like Kyle’s ever-present limp combined with Hemsworth’s general presence go a long way to making Kyle engaging. This just makes the script, which Duke wrote with Andrew Boonkrong, show its total lack of interest in his psychology even more, making it all the more frustrating.

[W]hile clearly influenced by plenty of Scorsese and Tarantino crime capers, Arkansas operates on a far smaller scale, and it doesn’t really have its act together.

Instead, Arkansas meanders, letting its supporting cast take center stage for long stretches of its (indulgent) runtime and five-act, character-juggling structure. John Malkovich shows up in the first section, as entertaining as ever, and Vince Vaughn gets to model some spectacular, spangley outfits. When these veteran performers are on screen, things are usually pretty compelling. When we’re forced to endure Swin’s courtship of a local nurse (Eden Brolin), not so much.

And yet, like the criminal organization it centers on, the film is severely functional, even sometimes in spite of itself. As a filmmaker, Duke seems to have a knack for crafting tension. Early on, Kyle and Swin decide that a gun is as likely to get them killed as it is to protect them, which means pretty much every stranger they meet poses a very real threat. Still, the film is unable to stay in one place for more than 20 minutes or actually invest in any of its characters, so no, Arkansas probably wouldn’t be worth carving out time to see in theaters. But since we’re all stuck at home anyway, I’d say one could do far worse.

Arkansas grifts its way onto VOD this Tuesday, May 5.