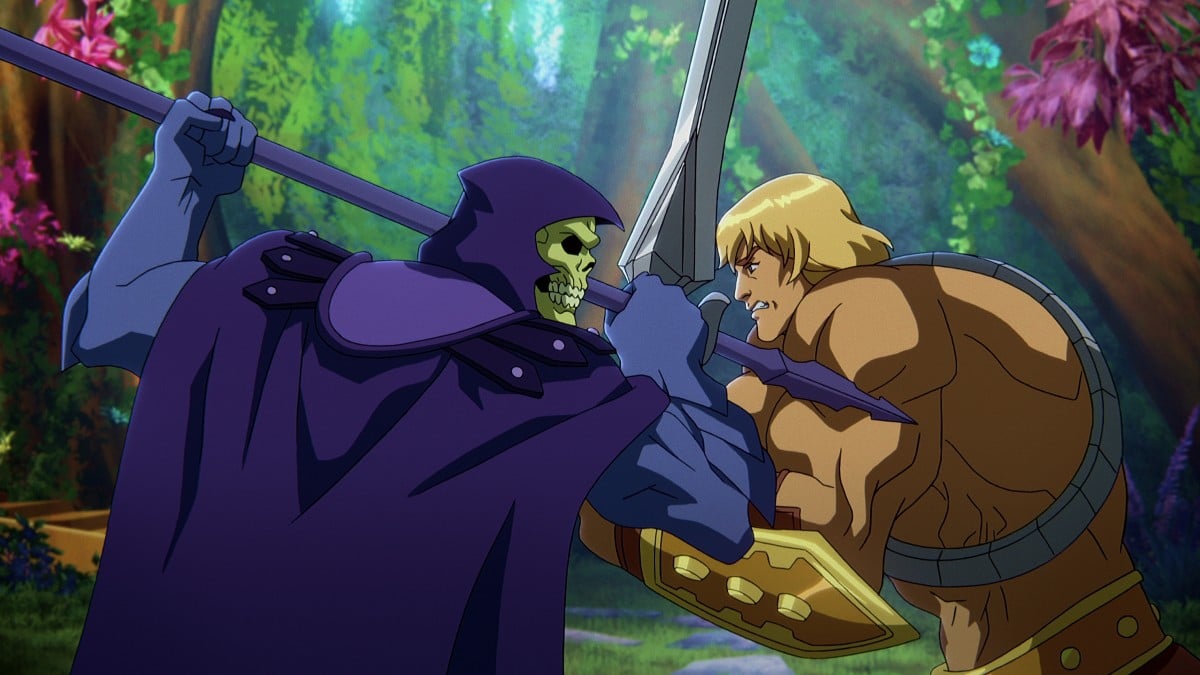 Kevin Smith re-launches He-Man by building on the original cartoon without being consumed by it.

Masters of the Universe: Revelation, Netflix’s animated reimagining of the iconic He-Man and his amazing friends begins on a familiar note. It kicks off as a continuation of the 80s cartoon—sadly skipping over the Cartoon Network series entirely while still borrowing some of its modern art direction. Revelation checks in with the classic Masters of the Universe just before all magic vanishes from the world. The annihilation of magic (including the Power of Grayskull) paves the way for a bold, watercooler-worthy reset of all that has come before. Given this dramatic paradigm shift, Revelation almost feels like a spin-off, rather than a sequel series.

It’s odd to remember that the original He-Man only ran for two seasons, totaling 65 episodes. A new series jumping into this world again would feel stale and tired if it simply recycled the conflict between He-Man and his arch-nemesis, Skeletor. Still, it’s a fascinating, risky play to turn the series and its status quo so totally on their heads after just one episode. If you don’t want to know why, then at this point, you may want to go check out the series for yourself before reading any further.

Developed by Kevin Smith, Revelation comes in two parts, the first one out now with just five episodes. Amid a typical skirmish between He-Man (Chris Wood) and Skeletor (Mark Hamill), Eternia changes forever when a mysterious power manifests during their clash As a result of this unexplained force, He-Man and Skeletor vanish. Revelation skips forward years later—to an Eternia where the Masters have adapted to this new normal, where magic is on its way out, and technological supremacy is rapidly gaining ground.

Teelah (Sarah Michelle Gellar) takes over as the show’s main protagonist, though a self-imposed exile has distanced her from the rest of the Masters, including her father, Man-At-Arms (Liam Cunningham). It’s not long before fate summons her back to the fray alongside some unlikely allies, chief among them Skeletor’s right-hand, Evil-Lyn (Lena Headey), who shares a common goal with Teelah: restoring Eternia to its former glory.

By shifting the stakes of this world to something more concrete and conclusive, Revelation feels like a toy box fantasy come to life, while still standing as a satisfying continuation to the original show. For the moment, Netflix’s She-Ra and the Princesses of Powerstill outshines its younger sibling. But Masters of the Universe: Revelation has a look and feel all its own, one that combines the original show’s gloriously cheesy, macho-80s aesthetic with a more grounded approach to character and story. The Masters often look back on their past adventures with nostalgic glee, like the Mystery Inc. Gang did in the 2002 live-action Scooby-Doo movie. But we know they need to move on at some point. After all, they need new destinations and adventures if their stories are truly going to continue.

…It’s a fascinating, risky play to to turn the series and its status quo so totally on their heads after just one episode.

Man-At-Arms, in particular, is presented as a far more compelling character here, forced to reckon with his reckless decision to hide Prince Adam’s secret identity as He-Man from his loved ones for so long. Orko (Griffin Newman) will certainly make fans of the Blank Check podcast chuckle as they hear his earnest, weakened voice due to a lack of magic left to fuel him. Cringer, unfortunately, still lives up to his name, despite a solid vocal performance from Stephen Root (who deserves better than this).

Revelation excels in its world-building and sense of exploration, dramatically expanding the mythos of Eternia and its peoples. Not everyone agrees that magic is all that necessary. Some have even bought into a technological cult ruled by former Skeletor minion Triklops (Henry Rollins), which seeks to prevent the Masters from achieving balance. Skeletor’s disappearance does not mean that Eternia is at peace. Indeed, daybreak’s a long way off for the planet’s motley, He-Man-less Masters.

It’s easy to see the minds behind Revelation putting all of themselves into the writing of these characters. They celebrate He-Man‘s past, while still adapting and adjusting to its future. Its animation is solid, steady, and polished enough to lure in hardcore anime fans. For those who’ve never stepped foot inside Eternia and only know about He-Man through cultural osmosis, Masters of the Universe: Revelation also works well as a new entry point, using frequent flashbacks and efficient exposition to get what’s come before across. It probably won’t shatter expectations, but as the first part of an intended finale for one of pop culture’s most cherished icons, Revelation proves itself worthy of Castle Grayskull and its fabulous power.

Masters of the Universe: Revelation is streaming on Netflix.

Masters of the Universe: Revelation Trailer: