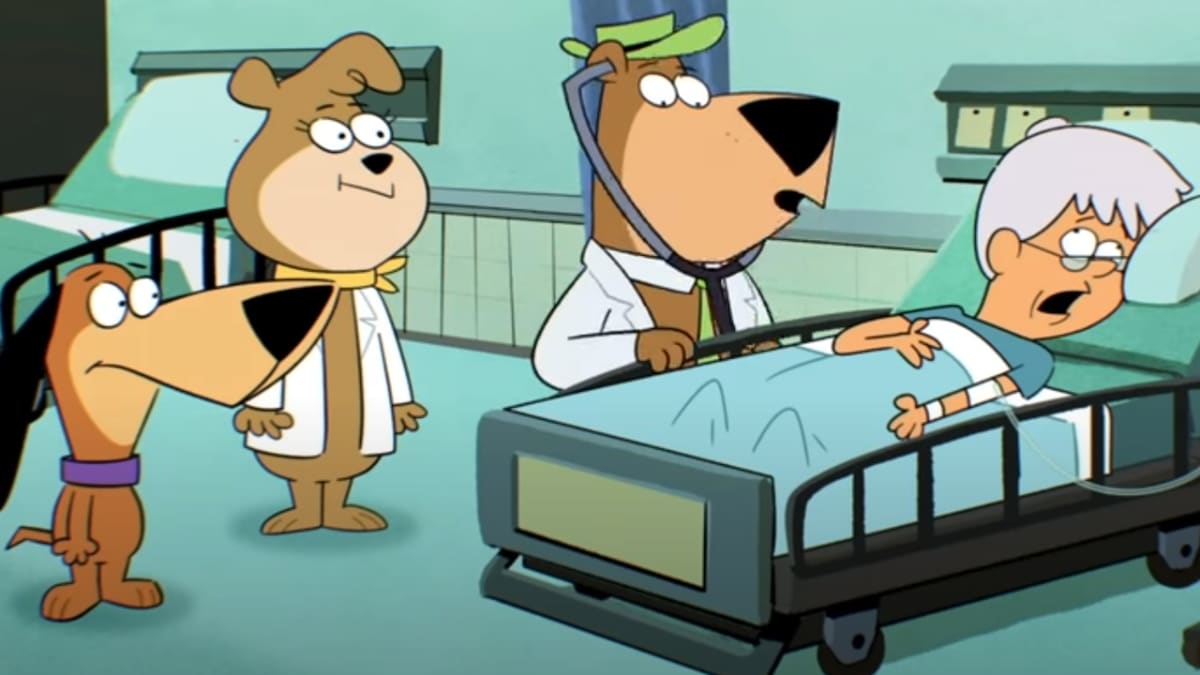 The small, fictional town of Jellystone is like other close-knit communities across America. It’s quaint, charming, and filled with jittery citizens on the edge of a nervous breakdown. HBO Max brings back the beloved characters of Hanna-Barbera (the first since their deaths in the 2000s) for a newer, more anxious generation with, an animated show that’s as hilarious as it is self-aware.

Developed by Chowder and Harvey Beaks creator C. H. Greenblatt, Jellystone! brings the deep Hanna-Barbera roster into modern times by being surprisingly mature with its themes on mental health and self-care. The town’s inhabitants are all the characters we know and love. Huckleberry Hound (voiced by Jim Conroy) is the mayor, and Yogi, Boo-Boo and Cindy Bear (voiced by Jeff Bergman, Greenblatt, and Grace Helbig) are all doctors in the local Jellystone Hospital. No one seems particularly good at their jobs besides Cindy, which is why most episodes end with the town in ruins.

The darker tone becomes obvious in the opening scene of the first episode, titled “Yogi’s Tummy Trouble.” Yogi and the gang are gathered around an elderly lady on life support when the adorable pup, Augie Doggie (voiced by Georgie Kidder), comes out of nowhere to sing an annoyingly catchy tune about kittens, which makes the elderly woman flatline after suffering “musical trauma.” When she’s revived, everyone celebrates before Boo-Boo promptly hands the woman a bill for $10,000. Just in case you weren’t sure if this children’s show would fully roast America’s failing health care system, the next scene begins with Yogi, one of the most popular cartoon characters of all time, exclaiming, “Nothing makes me happier than giving old people bills.”

The show may be more mature than we remember when watching Captain Caveman flying around screaming gibberish on Saturday mornings, but it sandwiches the adult cynicism with the old-school, madcap energy of the original Hanna-Barbera shows while offering some valuable lessons about taking care of your mental well-being. Captain is still flying, waving his wooden club around, but now he has to come to terms with the sobering responsibilities of fatherhood after he finds his frozen son in an episode called “Ice Ice Daddy.”

This is also perfectly encapsulated with the standout episode, “Must Be Jelly,” which follows the overachieving Cindy Bear as she runs around the hospital taking care of everyone and everything. She’s a little stressed, but proud to be a woman “that can do it all and have it all.” Unfortunately, she’s so busy that she forgets to read for her book club. The book itself is a hilarious Easter Egg showing a sexy Wilma and Fred Flintstone on the cover of a romance novel.

Cindy uses her ingenuity to get around this dilemma by inventing a laser gun that turns people into jelly molds, giving her extra time to read. However, she keeps finding herself needing more time, resulting in her turning all the townspeople to jelly in the process. In today’s world where children are pressured to be perfect starting in pre-K, it’s a beautiful lesson on how not taking time to ourselves can hurt us in the long run, told with hyper-creative energy and well-crafted jokes. After Cindy appears to come up with a way to reverse the jelly and bring people back within a few hours, Jabberjaw (voiced by Niccole Thurman) ends the episode with “Wait, why does my phone say three years have passed?”

The show is also buoyed by the wonderfully straightforward animation, which uses 2-D drawings based on the classic characters, but combines it with the simple lines and clean backgrounds used in modern classics like Regular Show. It allows the audience to focus on the jokes and internal struggles of the characters instead of the scenery.

It’s also elevated by an incredible cast of voice actors who all bring a new level of sophistication and emotion to these timeless characters, including Reno 911 and The State’s Thomas Lennon. Top Cat was never a character who had a deep inner life, but Lennon brings the goods by making T.C. a ball of anxious despair underneath his bohemian “cool cat” exterior. When he tries to hatch one failed scheme after another to win back his alley home in the episode “Cats Do Dance,” you can hear the existential dread in his voice when he realizes he may be on the losing end of this battle.

Jellystone! is what happens when a generation of intelligent animators and writers who grew up on The Simpsons, with its rake stepping meta-humor and heightened political commentary, get their hands on a timeless cartoon property. Like Springfield, it may not be a town I want to live in, but it’s a place I’m excited to watch be destroyed over and over again.