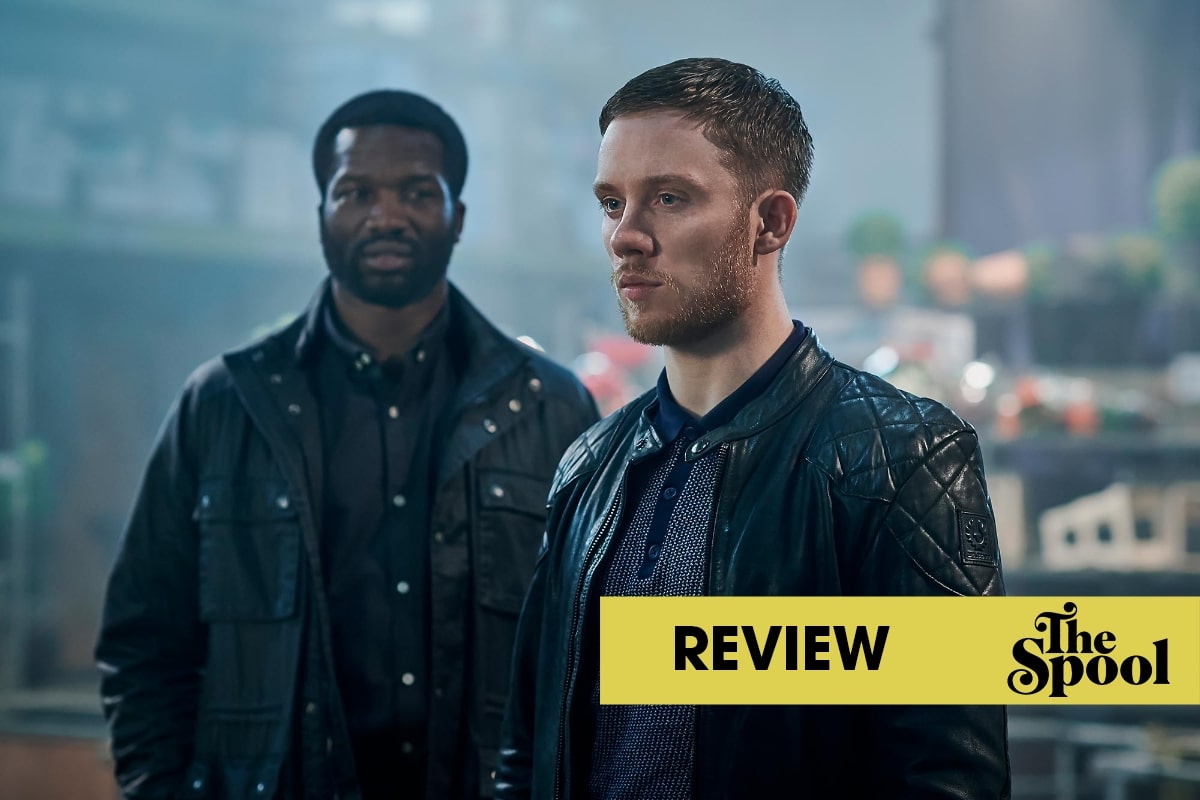 Finn Wallace (Colm Meaney), the most powerful gangster in London, has been murdered. With his demise, the trampoline has been pulled out from under the city’s underworld. The landings will not be pretty.

Finn’s son Sean (Joe Cole) is willing to burn everything to the ground to find his father’s killer. Finn’s business partner Ed Dumani (Lucian Msamati) is trying to discover a massive secret Finn was hiding from him while keeping London crime’s status quo as intact as possible. Undercover detective and all-around badass Elliot Finch (Sope Dirisu) is aiming to seize on Finn’s death to infiltrate the Wallace organization’s inner circle. And all the while, the web of power plays and schemes continues to weave itself.

Created by director Gareth Evans (The Raid and The Raid 2, Apostle) and his longtime cinematographer Matt Flannery, Gangs of London is excellent. Its action sequences are creative, varied and vicious. Its character work is memorably written and nimbly performed. In tandem, Gangs of London’s action and characters create an interesting, thoughtful study of trauma’s origins and lasting consequences.

In addition to this, the show’s mood and sense of place are striking. Its sense of humor is welcomely morbid. The five episodes screened for this review include an all-time great movie joke, one that gets funnier as its layers peel back.

Gangs of London’s story is exciting, propulsive and told really, really darn well on every level. Consider Elliot, the undercover cop. When we first meet him, he’s retrieving a stash of money from a sewer drain drop. Once he has the cash in hand, he checks to make sure that he’s presentable. Shortly afterwards a wreath falls from the hearse carrying Finn’s corpse, Elliot is the first to notice. By the time the hearse’s driver stops the car to retrieve the fallen floral arrangement, Elliot’s already got it in hand.

Elliot’s introduction establishes him as a cautious, deliberate man who’s always got at least an eye on the what, the where and the whys of his surroundings. This carries over into the way he fights. He’s a superb fighter, but even being a master painsmith isn’t enough to survive the punchy side of the London underworld. So Elliot keeps his eyes open. He uses the environment, makes weapons out of everything from a pub dart (as glimpsed in the trailer) to a thoroughly repugnant mattress. He doesn’t just win fights by overpowering his foes, but by outthinking them.

Yet all the caution and quick thinking in the world won’t enable Elliot to escape his from himself. He is still mourning the deaths of his wife and his child. Infiltrating the Wallace organization is as much an opportunity for Elliot to focus on something besides his grief as it is a chance for him to bring down a ruthless criminal syndicate. But undercover work has stressors and traumas of its own. There is more than one way to get so lost that there’s no coming back from it.

In tandem, Gangs of London’s action and characters create an interesting, thoughtful study of trauma’s origins and lasting consequences.

Dirisu takes this contradiction and builds a tremendously compelling protagonist. Elliot Finch is a man trying to do right and keep himself together. From moment to moment and blow to blow, he’s damn near unstoppable. But on a macro scale, he is struggling. With his conscience, with his grief, with the things he witnesses and the things he does in the course of his job. Whether Elliot’s engaged in a mortal duel with a scantily clad, cleaver-brandishing goon or facing a mutual attraction to Ed’s daughter Shannon (Pippa Bennett-Warner), Dirisu is magnetic throughout Gangs of London.

Dirisu’s castmates do similarly strong work. In Sean, Cole has created a man who is neither the ultra-tough villain he wants to be, nor the flailing fool his opponents take him for. The result is an extraordinarily dangerous young crime lord who cannot quite compartmentalize away the violence and trauma. Msamati’s Ed is trying to play a situation primed to explode as coolly as possible. But between Sean’s recklessness, Finn’s secrets, and Ed’s own secrets, the containment he’d prefer is becoming more and more unlikely.

The quality of Gangs of London’s filmmaking matches the ensemble’s good work. Of the five episodes watched for this review, Evans directed two and Corin Hardy (The Hallow) three. Flannery did the cinematography for Evans’ episodes and Martjin van Broekhuizen (The Hallow) shot Hardy’s.

Evans’ episodes weave a distinct eeriness into the spaces they inhabit. Whether isolated and gleaming like the under-construction skyscraper where Sean incinerates an unfortunate foe or rotting and grody like the squalid apartment where Elliot battles the boxer-briefed butcher, these are places where terrible things happen. The action is thrilling, and it has weight. Gangs pays as much attention to Elliot’s expressions after he emerges from the apartment as to the fight that happened inside of it. His humor tends towards dark understatement, as when Elliot cites his dart as the deciding factor in his battle in the pub.

Hardy’s episodes cast a wide net. They spend time with various players amongst the gangs to compare and contrast their styles and lives with Elliot, Sean and Ed’s. Evans establishes the consequences and cost of the underworld, and Hardy studies the people facing and paying them. His humor tends towards the surreal – including the movie joke mentioned above and a direct homage to Edvard Munch’s The Scream.

Gangs of London boasts terrific performances from Dirisu, Cole, Msamati and their fellow actors. Gareth Evans and Corin Hardy back them up with brainy, muscular direction.  It does not wallow in edginess. Its purposeful in its use of carnage, crafting fights that both thrill in the moment and shade the show during its quieter sequences. For action fans, folks who dig crime stories, and lovers of high-grade film craft, Gangs of London is must-see television.

Gangs of London is now available on AMC