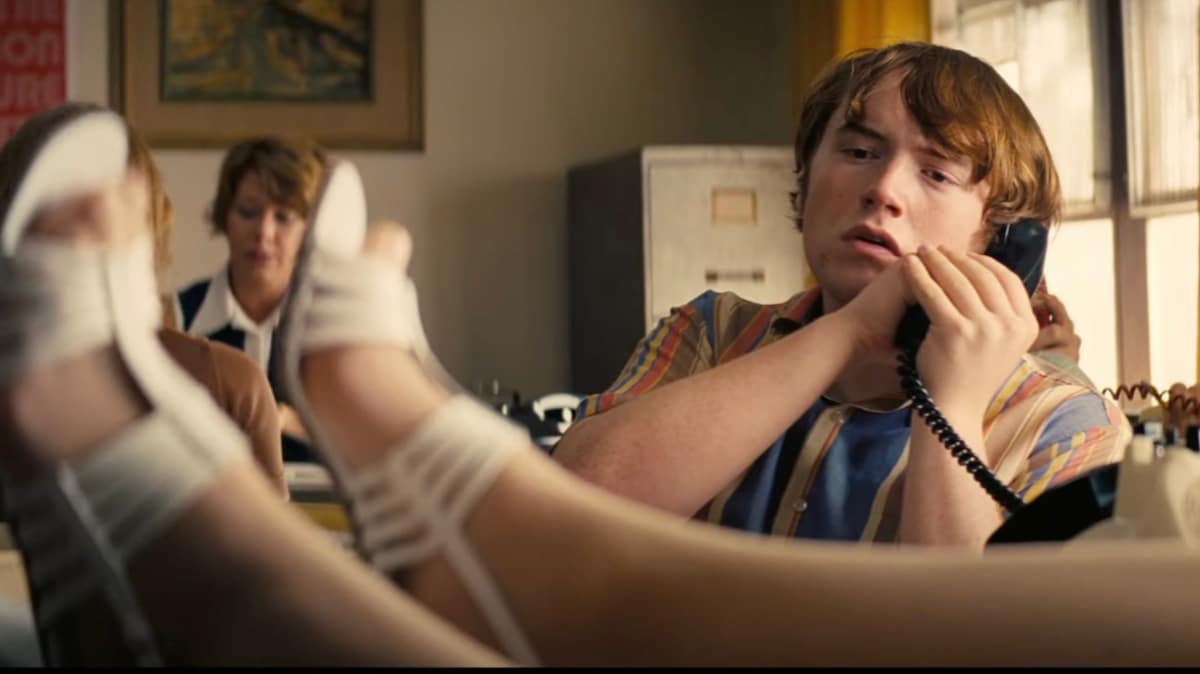 Paul Thomas Anderson set out to make a love story with Licorice Pizza, and ended up creating his most joyful flick to date. Seemingly lacking is the dark heart so many of his stories contain, whether it’s in the wildly toxic relationship between designer and muse in Phantom Thread or brutal depictions of loss and loneliness in Magnolia. Instead, Licorice Pizza has a lightness he hasn’t truly approached since Punch-Drunk Love.

It’s an intoxicating ode not just to young love, but youth itself, the ‘70s, and the San Fernando Valley.

Eschewing the majority of his regular cast of players (keep an eye out for John C. Reilly in a bit part, though), we’re introduced to not just one, but two scene-stealing newcomers: Cooper Hoffman (Philip Seymour Hoffman’s son) and Alana Haim (of Grammy-nominated band Haim). Both of them are revelations in their on-screen debuts and watching the two of them interact through quick-witted barbs and banter, and withering stares across the room is what makes the film sizzle exactly the way Anderson surely hoped it would.

Child-actor Gary (Hoffman) is all confidence and posturing, a boy perpetually play-acting as an adult in an attempt to impress those around him. It ingratiates him with adults, who clearly find him more tolerable than other kids, and it wows his peers, for whom being ordered a round of Cokes at a fancy restaurant feels like an extravagance.

Meanwhile, Alana (Haim) mostly walks around with a thousand yard stare, overwhelmed by adulthood and completely unclear what her role in it is supposed to be. More often than not, she’s reverting to comfortable teenage immaturity, screaming at her sisters and sticking out her tongue when almost no one is looking. She doesn’t know what it means to be grown up, she’s only sure that Gary’s act isn’t it.

As we bounce from vignette to vignette following the pair over the course of the summer, it’s obvious that this mismatch in understanding of adulthood is what’s bringing them together. Gary thinks he’s got it all figured out, Alana knows she doesn’t. Both Haim and Hoffman manage to hit the exact right balance between naivete and overconfidence, their natural charisma translating perfectly into the blossoming romance on screen.

But while Anderson clearly didn’t intend for Licorice Pizza to foster something dark, it does regardless. Because as captivating as Gary and Alana’s relationship is, the fact of the matter is that it’s a relationship between a fully grown adult and a child, and there is no way to avoid the pause it’s going to give some viewers—including a long-time P. T. Anderson fan like myself.

But that’s both the beginning and end of the conversation, because the film is intent on pulling the audience onto Gary and Alana’s team. Or more plainly, it doesn’t ask the audience to question their relationship because it doesn’t want them to. Everything in the film resists it, from the actors’ incredible chemistry to the way Anderson films them. The camera captures the glow of the California sun and points it directly at the two of them. It’s borderline impossible not to want them to be together, or at least spend time in each other’s orbits.

And this is the issue I find myself wrestling with because the second you flip the genders in this script, things immediately feel a little more unsettling. If it’s a 25-year-old man and a 15-year-old girl, would we be quite so quick or eager to brush any uncomfortable feelings aside? To justify the relationship? I’m not convinced we would, and unfortunately that taps directly into society’s sad and storied history of dismissing the abuse of boys in this country.

To be crystal clear, Gary and Alana’s relationship in Licorice Pizza is neither predatory nor abusive. I am quite far from arguing that. The problem is not that the film merely features such an unconventional relationship, rather that it goes to such great lengths to keep audiences from feeling remotely uncomfortable with it, when being uncomfortable seeing an adult and a kid together is, well, pretty normal. Even if the adult in question is good person and kind. Even when the kid in question is the pursuer. Even when they “seem older.” Even when their closeness develops out of genuine friendship and care.

Even then, it’s still reasonable to ask that the film acknowledge and really engage with the possibility that no amount of stunning cinematography or on-screen personality will get some people on board and that’s valid.

The gap between them is more of a gulf than anyone in the film wants to admit.

Again, to be clear, I think it’s possible for Licorice Pizza to engage with this uncomfortable truth more honestly and tell the story it wants to tell. I’m not asking for a different movie to exist, simply for it to sacrifice some its sunniness to deal with reality.

It’s a movie chock full of things that are both easy to love and well worth loving. Anderson’s sense of humor really shines, particularly in the scenes that feature Bradley Cooper as the over-sexed, ultra-coked-up Jon Peters (his performance here alone is worth the price of admission). In fact, nearly every side character has at least one absolutely perfect moment to shine. And outside of the relationship between our Gary and Alana, it approaches youth with such empathy it’s likely to rocket you back to your own teenage years or young adulthood no matter when you grew up. That’s what’s so frustrating about this uncomfortable aspect of it all—it sits like a brick in your stomach if you see it.

Whether or not that experience will ring true for you certainly varies, and your ability to get on board with where Licorice Pizza goes will determine where you land when the credits roll. In short? For all its obvious charms, mileage may vary—even among super fans.