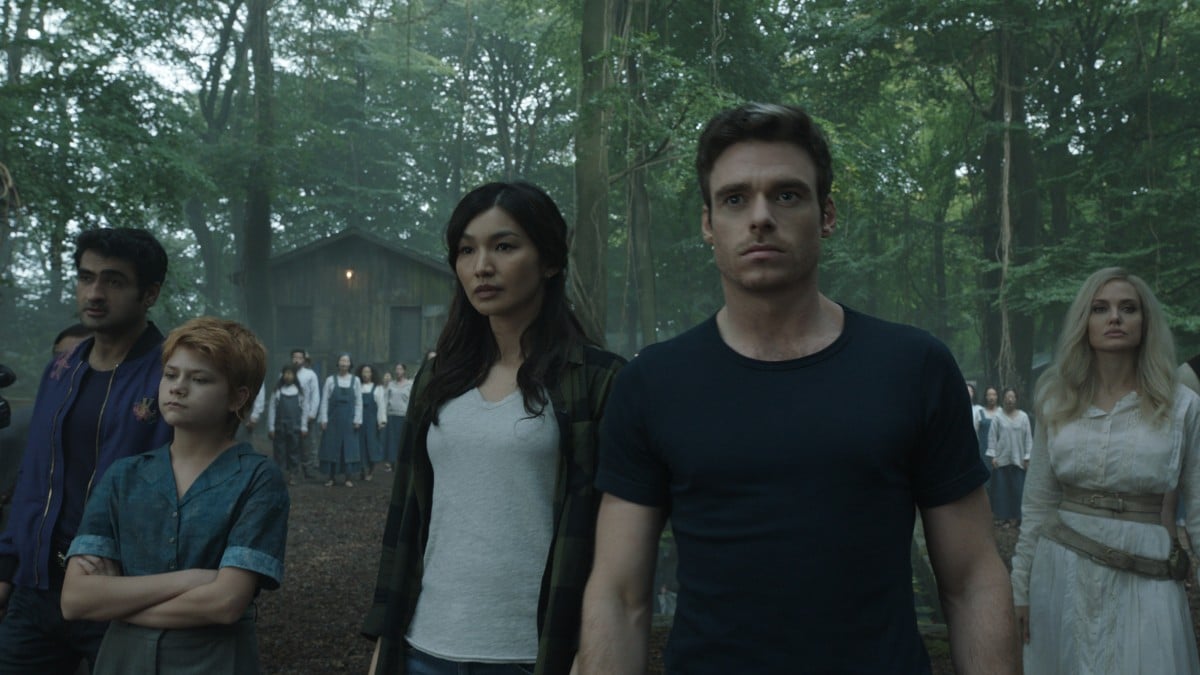 Chloé Zhao’s admirable effort to tell an intriguing morality play about the burden of godhood is hampered by all the CG business required of its cinematic universe.

It’s funny to think about the mission creep that’s escalated within the Marvel Cinematic Universe since its debut in 2008 with the first Iron Man. Watching Eternals, you can’t help but wonder that all of this started, as Jeff Bridges once quipped, in a cave with a box of scraps. Now, with Thanos and the events of Eternals, the MCU truly delves into the cosmic — the vast span of space and time, and the very fabric of the universe at stake. And yet, the bigger and longer the MCU grows (heh), the more weightless it all feels; there’s heaps of ambition at play in Marvel’s latest, at least within the meager confines of Kevin Feige’s franchise stewardship, but its reach exceeds its grasp.

Playing like a curious mix of Watchmen, The Big Chill and The Old Guard, Eternals takes a stab at the somber, following a group of immortal, godlike superheroes tasked with protecting the Earth from sinewy CG beasties called Deviants. “In the beginning,” as the film’s opening lines portend, they’re sent to the planet in ancient Mesopotamia, gradually insinuating themselves among early man to aid in their development. They’re happy to build myths around themselves (many of them are the implicit basis for everything from Greek gods to Superman to maybe even Jesus Christ) and encourage man to follow its potential — they’re only asked not to interfere in their conflicts.

But the centuries wear on them (and long after they’ve destroyed the Deviants, or so they think), they grow disillusioned with their charges’ selfishness and bloodshed, things they know they could change with the snap of a finger if not for their own rules. So they split up and spend a few hundred years living their own lives, falling out of touch. It’s only in 2021, when a series of massive earthquakes herald the return of the Deviants, and their matriarch Ajak (Salma Hayek) is found dead, that the Eternals begin finding each other again to figure out who did it, take down this new crop of Deviants, and find out the true nature of their mission on Earth.

All of that sounds like mournful, bold stuff for Marvel, whose works flirt with the dramatic without ever really escaping the Avengers-friendly quip mode the series has gotten used to. And it is, in fits and spurts: Eternals is certainly the closest Marvel has come to emulating a true auteur sensibility, especially with an acclaimed auteur like Zhao behind the camera. The director of The Rider (the best movie of 2018) and Nomadland (which recently won Oscars for Best Picture and Director) has a knack for natural environments and emotionally rich cinematic tapestries. Many have compared her works to Terrence Malick in their sun-dappled airiness. Eternals so clearly wants to bring that energy to the MCU, lending the sheen of prestige to its commercially successful movie franchise as it creeps toward its thirtieth (!) entry.

But for as much as cinematographer Ben Davies (filling in for Zhao’s partner and house DP Joshua James Richards, who merely gets camera operator credit here) shoots for the texture and warmth of real outside locations and the muted colors Zhao is known for, it can’t help but surrender to the Marvel sludge after a certain point. Dialogue scenes and individual moments sparkle with Zhao’s glint of contemplative wonder, but when the film has to stop in its tracks to let its cavalcade of heroes punch CG monsters (or each other) for 15 minutes, all hope of that individualism goes right out the door.

It doesn’t help, of course, that the Eternals’ roster is more overstuffed than a Korean boy band, which makes it hard for any one player to stand out. Our window into the story is Sersi (Gemma Chan, dipping back into the MCU after Captain Marvel), the empathetic heart of the team who can transmute non-sentient materials. She’s trying to move on with her life after her on-again, off-again Eternal boyfriend Ikaris (Richard Madden), even shacking up with another Stark, normie English poetry teacher Dale Whitman (Kit Harington, waiting patiently in the margins for his own superhero movie to start) until Ikaris comes back to save her and rekindle their centuries-old flame. Their immortal love story hardly lights up the screen, even as Marvel sees fit to give Zhao the first sex scene in the MCU — even in their sensuous lovemaking in the tender light of the desert dawn, it feels oddly chaste and virginal, maybe because the two leads come off as more than a little robotic.

There’s heaps of ambition at play… but its reach exceeds its grasp.

The rest of the ensemble fares a bit better, though the get-the-band-back-together structure (punctuated by flashbacks to their 7,000 years of history in everywhere from Babylon to South Dakota) means our characters have to battle for not just survival against the Deviants, but for screentime. There’s energy-blaster turned Bollywood star Kingo (Kumail Nanjiani), about whom much ballyhoo has been made of his public transformation but who at least keeps the frenzied energy we’ve come to love about him; he’s easily the film’s highlight. It’s also relatively diverting to see Barry Keoghan, he of the Resting Villain Face, shake things up and play a good guy, the wearied mind-controller Druig.

Brian Tyree Henry’s openly-gay inventor Phastos does what he can to spice up some quintessentially creaky MCU jokes with his innate charisma, and almost pulls it off. Train to Busan‘s Don Lee is also endearingly winsome as the burly brawler Gilgamesh. Lia McHugh’s eternally-preteen Sprite has a Tinkerbell complex that offers some of the clearest exploration of the Eternals’ frustrations, and Angelina Jolie brings her effortless grace to Thena, a warrior queen teetering on the edge of madness.

It’s telling that there are very few characters apart from the Eternals themselves to drive much of the action: so much of the story revolves around their own anxieties or ambivalences around their mission on Earth, or the strain that centuries of existence can have on people who’ve run out of things to do. But as they begin to see the broader nature of their mission — one revolving around the Celestial beings who created them, and the ultimate fate of the Earth at the end of their watch — factions form about whether to let it happen, and what it might mean for their own lives.

These are interesting questions, but Eternals can’t break from the Marvel shackles enough to truly ask them. (Its biggest reach comes with Phastos sitting among the ruins of Hiroshima, rending his garments about his culpability in the creation of the atom bomb, a questionable setting for your cosmic morality play to say the least.) In the end, the solution to their dilemma still boils down to another CG punch-em-up on an abandoned beach, actors straining to move in skin-tight lycra suits while the previz soup swims around them.

For a film about millennia-old space gods with X-Men powers created by one of the most psychedelic minds in 1970s comicdom (Jack Kirby), Eternals feels decidedly pedestrian, its flashes of naturalism still drowned in the usual Feige trappings. Zhao is one of my very favorite filmmakers, and I sincerely hope that the profile and money from this gives her the latitude to make a dozen more smaller, independent projects that give her the chance to, well, direct the whole thing.

Until then, Eternals evinces the same identity crisis the MCU has had since Endgame; how do you keep this truck a-movin’ after such a definitive final chapter to the story? Turns out, you just tell the same story again and again, but put a different shine on it and call it ‘cinematic’.

Eternals builds up its own expansive corner of the Marvel Cinematic Universe in theaters November 5th.