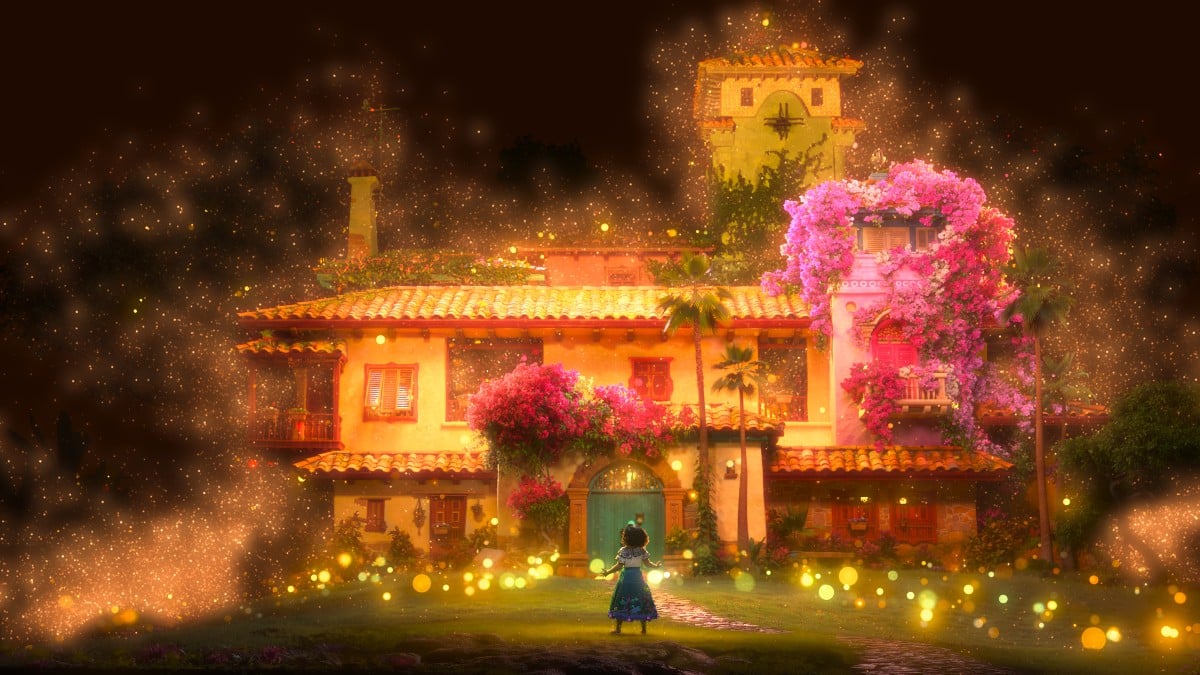 The studio’s latest combines the pop of its latest in-house pictures with a Pixarian high concept and Stephanie Beatriz’s excellent voice work to strong effect.

What if you were the only one in your entire family without magic? Disney’s Encanto sets out to answer that question with music and charm as its fanciful powers.

Encanto is a new animated musical from two of the minds behind Zootopia, Tangled, and a few other recent Disney Animation films that have been rightfully praised for stretching beyond the limits of what audiences want from this juggernaut studio now that computer animation can realize even the most complicated ambitions. With Encanto, filmmakers Jared Bush, Byron Howard, and Charise Castro Smith bring that new guard energy to one of the warmest, most wholehearted Disney films in years.

Encanto’s story follows the magical Madrigal family, who live in the modern-dayEncanto, a fictional, halfway mythical setting located in Colombia. The Madrigals are an eccentric bunch, and each of them is gifted with a single supernatural ability. One has incredible strength, another can hear a pin drop from miles away, another can shapeshift, and so on. There’s a morsel of that gleeful Incredibles unpredictability to the way the Madrigals’ powers wind into their family dynamic, but with a whole extended clan including cousins, aunts, uncles, and siblings. And that’s before considering their enchanted house, or casita, which is also capable of all manner of quirky, magical things.

All is well, save for the fact that that one of the youngest Madrigals, Mirabel (voiced by Brooklyn Nine-Nine‘s Stephanie Beatriz) is the only member of her family to never have gotten her “miracle,” for reasons unknown. Amongst her amazing, larger-than-life siblings, each capable of doing wonderful things that bless their entire community, Mirabel is aimless and out of sorts. She loves her family more than anything, but she doesn’t quite know how to fit in or make herself useful to everyone else.

It’s hopefully not too much to say that the typical Disney film follows a familiar formula when it comes to plot structure. Its characters start in one place, things go wrong, they leave on a riveting quest and perhaps pick up friends along the way to resolve the crisis, you know the song. What’s immediately alluring about Encanto is that its driving narrative is built into its already captivating location, allowing the audience to bask in the vibrant details and foibles of the Madrigals.

Encanto is a wholesome, delightful movie with so much heart—every one of its frames bursts with color and personality.

The music in Encanto hits the right notes, its hummable pop lyrics built on the lush sound of Colombian culture. Lin-Manuel Miranda developed the songs as he did in Moana, but unlike that film, it’s the third act tune — a hauntingly somber piece that might trigger waterfalls of tears from the right audience — that pushes the picture’s otherwise above-average soundtrack into iconic territory.

There are joys and pleasures scattered throughout Encanto (both the film and its namesake). An early number kindly (if perhaps a bit pedantically) lays out who is who and related to who and what they can do. The voice acting is sharp across the board—particularly Beatriz’s work as Mirabel. John Leguizamo does similarly standout work in an important supporting turn—the sort of performance that makes one long for more of it.

Encanto is a wholesome, delightful movie with so much heart—every one of its frames bursts with color and personality. The casita is a wonderful setting, invoking magical realism’s wonder. Encanto plays like a blend of Pixar’s high concepts and the sleek, poppy appeal of Disney Animation’s most recent films.

The picture’s only real issues lie in some too-tidy storytelling dynamics toward the end, including a sudden love triangle that doesn’t get enough setup to justify its landing. Indeed, the third act as a whole owes a lot to its barnburner of a big song, since otherwise, it’s hurried enough that it plays like a bunt instead of the home run it was winding up for.

Encanto brings its magic and its music to theaters on November 24th, 2021.