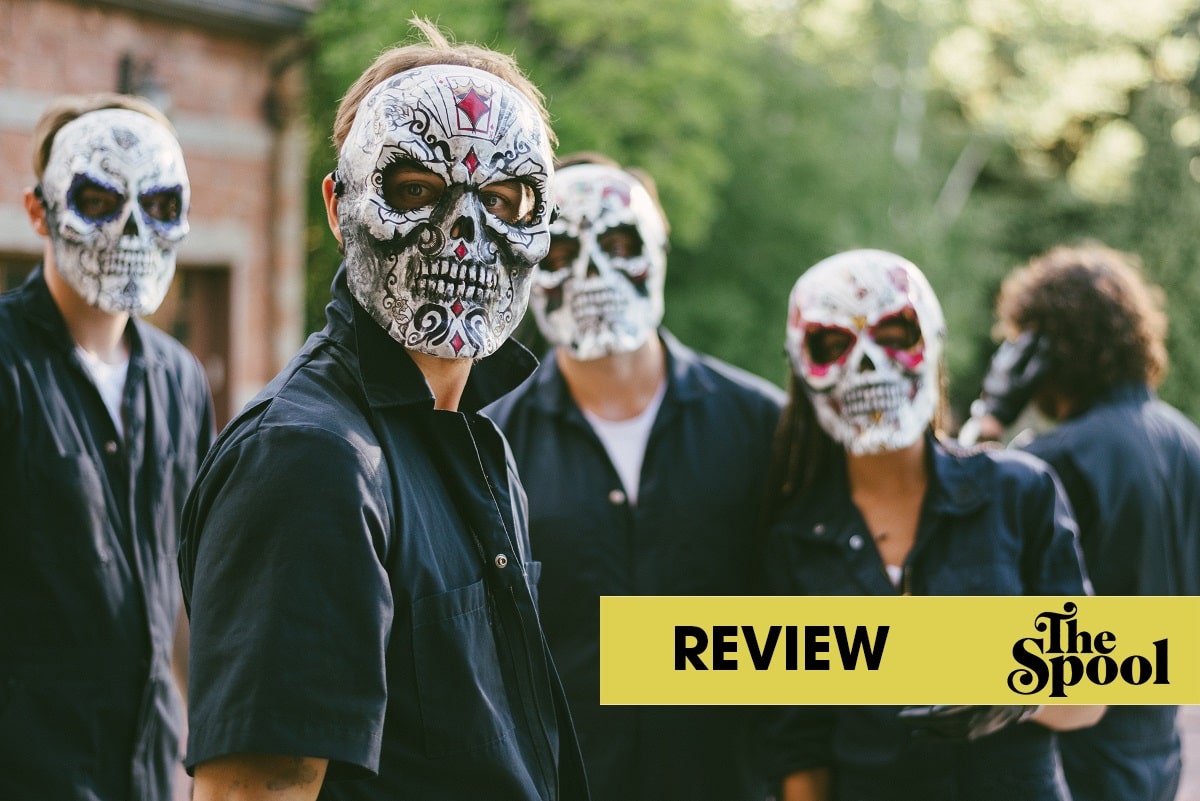 Echo Boomers is an ultimately more-good-than-bad movie that trips over itself repeatedly. Its director/co-writer, Seth Savoy, works well with his talented cast. He repeatedly crafts striking showcases for them, both as an ensemble and as individuals. The cast in turn take these opportunities and run with them. Patrick Schwarzenegger (Daniel Isn’t Real) and Alex Pettyfer (Magic Mike) do particularly strong work as, respectively, the newcomer and the head of a band of burglars who style their crimes as protests against income inequality.

Conversely, Savoy deploys overwrought stylistic flourishes and a rotating voiceover poorly. Echo Boomers’ front half is an overdone, even obnoxious slog that tries so hard to be capital-M Meaningful that it overextends itself and whiffs all its punches. It’s quite frustrating, both because the aggressive editing and news clip montages try to shout over the cast’s good work and because Echo Boomers improves significantly once it eases up on the flaunting. Its back half is a compelling tale of a criminal enterprise rapidly spinning out of control, and the consequences of that spiral for its protagonists.

Schwarzenegger is Lance, a young art lover trying to break into the workforce post-college and post-financial crisis. When his cousin Jack (Gilles Geary, The Path) promises him a job in “art acquisitions” in Chicago, Lance jumps at the opportunity to maybe actually do some sort of work that might pay something. And then Jack’s job offer turns out to be for Ellis’ (Pettyfer) burglary crew. Armed with the addresses of the wealthy courtesy of smugly sinister fence Mel (Michael Shannon, Knives Out), the crew grab anything Mel can flip and smash the rest. Though Lance is initially taken aback, he swiftly finds himself warming to a life of crime. The crew uses their illicit escapades to vent their anger at a system that has failed them and fund parties that don’t end until the money runs out.

For all that the crew use rhetoric to psyche themselves up, their politics are quite shallow in practice. They spray paint slogans condemning the lie of trickle-down economics in the houses they trash, but they paint giant penises in the wreckage too. Pettyfer’s Ellis pitches Lance on their burglaries being acts of righteous retribution, but he’s most interested in excusing his own constant anger. The same holds true for the rest of the crew, with the partial exception of Hayley Law‘s Allie. They steal to strike back at their various demons, to fund fleeting pleasures, to feel good for however brief a time. Lance is explicitly motivated to keep stealing by the adrenaline rush it brings him.

Echo Boomers’ cast use the largely superficial nature of their characters’ politics to their advantage. They live moment to moment, and that catches up to almost all of them. Pettyfer in particular molds Ellis into a brooding bully who’s smart but too wrapped up in the immediate to grasp a bigger picture. It’s one thing to save money for a post-criminal life with his sweetheart. It’s another thing entirely to realize that his perpetual sour wrathfulness is rapidly alienating her. Ellis is a snarling, pretentious goon, and Pettyfer plays him quite well.

Schwarzenegger plays Lance as both a thrill-seeker and one of the more conscientious members of the crew. He loves to break things, see chandeliers come tumbling down, and hear vases shatter. In one of her voiceovers, Allie speculates that he finds art in it. But he’s not on a perpetual low-burning rage bender the way Ellis is. He actually likes and cares about his peers, and he’s appalled when they prove callous and self-centered in a moment of crisis. It’s telling that one of Lance’s biggest moments – and some of Schwarzenegger’s best acting in the film – is built on genuine heartbreak at a betrayal. Lance is far from heroic, but Schwarzenegger skillfully molds him into a worthy increasingly-in-over-his-head protagonist.

Echo Boomers improves significantly once it eases up on the flaunting.

Savoy doesn’t wield the superficial of his characters’ politics with the skill the cast does. Echo Boomers’ opens with a frenetic montage of talking heads discussing the plight facing Millennials circa 2010ish (their cited age range is 18-29, as opposed to 2020’s 24-39 age range). Each of the crew receives a similar montage focusing on their specific issues (one member is a veteran struggling post-military, while his best friend struggles to stand out in the extremely crowded computer science field and so on). These ultimately don’t do much more for the story than provide largely unused background information – the crew’s problems arise from their issues with each other, as opposed to their issues with society. At their worst, they feel like draggy, grating filler in a relatively compact movie.

Savoy’s heavy reliance on voiceover in the first half of the film is similarly vexing. Lance and Allie trade-off narrating (within the film, they’re conversing separately with a journalist played by Clue’s Lesley Ann Warren). But their dialogue is mostly clunky exposition, and most of that exposition is rendered redundant by the good work the cast is doing. A scene where Allie speculates on each member of the crew’s motivations while the crew ably demonstrates those motivations in the process of a burglary is especially frustrating. The narration overcorrects for something that didn’t need any correction to begin with.

Echo Boomers‘ early over-reliance on flash hurts it pretty substantially. The awkward and garish do give way to clearer, stronger filmmaking that backs up Schwarzenegger, Pettyfer, and company’s fine work rather than talking over it. But getting to that point takes patience that Echo Boomers doesn’t fully earn. Still, the cast and some of the later craft make it worth a rental for folks who dig crime stories.