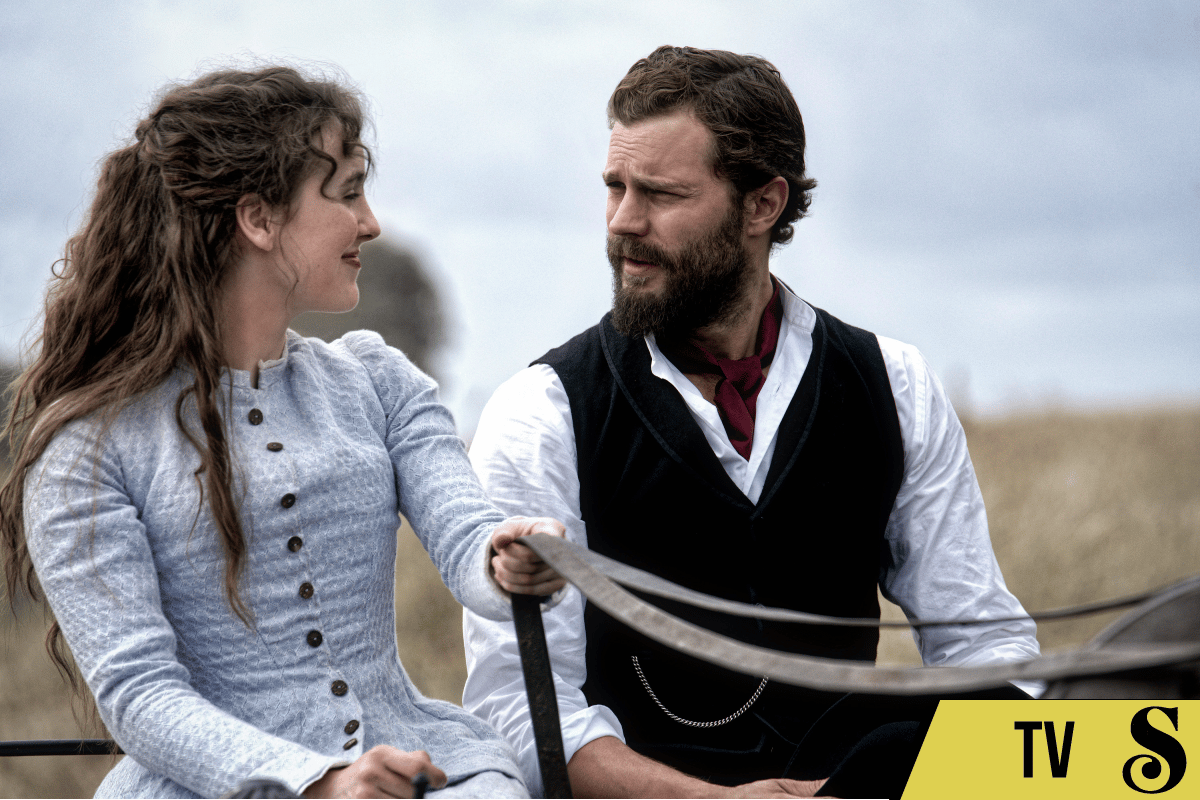 The three-part mini-series is stupendously performed and photographed, but wallows in anguish to the point of undermining itself.

On the heels of The Luminaries, Starz brings us another dramatic import, this time the Irish 3-episode miniseries Death and Nightingales, based on Edmund McCabe’s book of the same title and adapted/directed by Allan Cubitt. Set and filmed in County Fermanagh, Northern Ireland, Death and Nightingales is one of those rare sunny day thrillers, a gorgeously filmed but raw story of a young woman trying to save herself amidst family secrets, Irish Nationalism, and an increasingly untenable homelife.

Taking place over one day (with intercutting flashbacks). Death and Nightingales sells itself as an “epic tale of love, betrayal, deception, and revenge”, but it’s really a tale of survival. In July of 1885, Beth Winters (Ann Skelly), the Catholic stepdaughter of Protestant landowner Billy Winters (Matthew Rhys), turns 23 and plans to elope. At the age of 12, we learn, Beth learned that she wasn’t Billy’s biological daughter but that he still intended to leave her his entire fortune and estate, that is, if she “behaved herself”. What that meant, she’s discovered over the intervening eleven years, is that she is housemaid, dairymaid, cook, and companion to her widowed stepfather, with his attentions growing increasingly inappropriate and abusive as she ages.

Beth, caught in a trap of her own emotions, both hates her stepfather for his abuse of her dead mother and of herself, yet loves him as the only father she’s ever known. Billy, a landlord who also owns and operates the local rock quarry, clings to his family’s history and name even as they mark him as enemy and outsider to the locals, particularly Liam Ward (Jamie Dornan), a tenant and quarry worker with possible ties to recent Irish Republican bombings. Beth, a lonely soul whose only real friendship is with housemaid Mercy (Charlene McKenna), meets Liam one day while Billy is out of town, and a romance blossoms, leading irrevocably to the events of Beth’s birthday. “Killing’s a small thing,” Liam tells Beth after she confesses some of her wretched homelife to him, but how far is Beth willing to go to escape the only life she’s ever known?

The relationship between Beth and Liam (whose plot never really coalesces beyond “Is this handsome stranger a good guy or not?”) is seemingly the linchpin of the miniseries, as Dornan (still on his “Please forget about Fifty Shades” grand tour) is a sweet and solid sort of romantic lead and Beth is all hopes and trembling honesty when she’s with him, but it’s a disservice to the story to call it a romance. Beth and Billy are the pillars of the story, with Skelly’s icy fragility going head to head with Rhys’ sad eyes; Beth is a victim who longs for revenge, and Billy pictures himself the victim (Beth’s mother married him knowing she was pregnant with another man’s child and Billy has never let himself or Beth forget it).

The miniseries is entirely anchored by Skelly and Rhys’ performances, but that’s little consolation overall, especially when one is playing a character with seemingly no hope, and the other is playing a monster.

When local bishop Jimmy Donnelly (Seán McGinley) notes that Billy’s family has lived in the area for 300 years and asks when he will consider himself one of them, Billy’s response is a furious and drunken “Never”. His name, his fortune, his place in the County are layers and layers of the victimization he has put upon himself. He claims not to care about Liam’s possible Fenian connections, but angrily corrects the Bishop that “Those are my people” when he makes a negative comment about some English officers; he says he loves Beth and considers her his daughter while mistreating her in the worst ways. Billy is a rare example of a villain who truly cannot see that he is one, neither reveling in his misdeeds nor justifying them, simply not understanding that they are misdeeds to begin with. When faced with Beth’s sharp words and accusations, Billy’s first reaction is almost always to tear up, something Rhys does beautifully and Skelly matches every time with cold and utter disdain.

The plot, sadly, is a predictable thing, particularly if the viewer enjoys historical dramas as a rule. There’s a scene within the first half-hour that is such a cliche bit of foreshadowing that it’s almost laughable, and between the compelling opening when Beth plots a poisonous death for Billy in a chilling scene and the bleak events of the final episode are a lot of lovely filler scenes of Beth wandering the countryside or glaring at Billy over tea. The miniseries is anchored by Skelly and Rhys’ stunning performances, but that’s little consolation overall, especially when one is playing a character with seemingly no hope, and the other is playing a monster. Beautiful and well-acted, Death and Nightingales nonetheless strains the audience’s limit for melodrama.

Death and Nightingales premieres on Starz on Sunday, May 16th at 10 PM EST. Episodes two and three will air at 9 PM EST on subsequent Sundays.