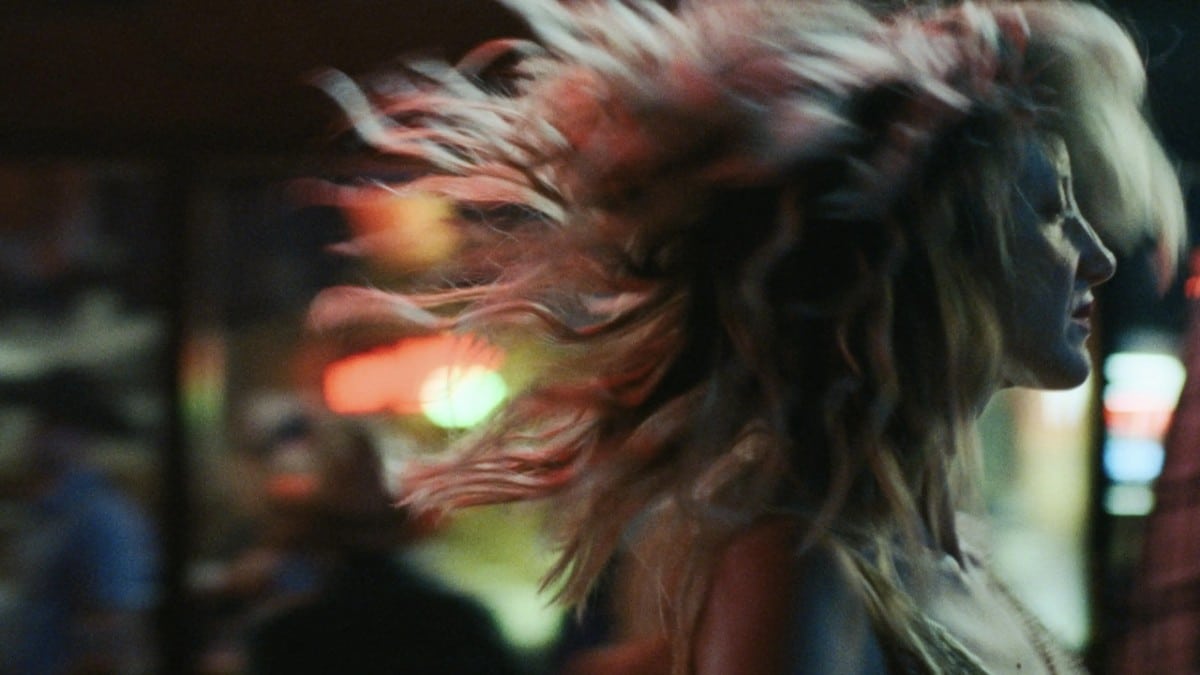 To Leslie tells a story of painful loss and possible redemption as familiar as the ones recounted in the country songs born out of its West Texas setting. In the case of Michael Morris’s feature debut, familiarity does not breed contempt. What To Leslie lacks in originality, it more than makes up for in terms of its craft and very impressive central performances from Andrea Riseborough and Marc Maron.

Over the opening credits, a photographic recap of the life of Leslie (Riseborough) culminates with a news broadcast announcing that she has hit the lottery to the tune of $190,000. During the interview, Leslie talks about her dreams for her and her young son, James, but the only truly convincing thing she says is when she shouts, “Drinks are on me!” to the crowd of locals celebrating with her. Six years later, we see Leslie alone in a grungy motel room, getting ejected for not paying her bill. At first, she appears to have hit rock bottom. But as it turns out, she isn’t quite there yet.

Before Leslie reaches her lowest, she briefly reunites with the now-19-year-old James (Owen Teague). Her insistence on her sobriety falls apart less than a day after her arrival. James, no longer willing to put up with her, puts her on a bus back to her hometown, a place where everyone knows her as the woman who hit the jackpot and pissed it all away. Among those who have not forgotten are Dutch (Stephen Root) and Nancy (Allison Janney), former friends who grudgingly agree to take her in for a bit, until of course, she blows it with them as well.

When Leslie’s now-tenuous charms fail to attract even a fellow drinker at a local bar, she ends up outside the town’s motel, where she is chased off the property by manager Sweeney (Maron), perhaps the one adult in town who doesn’t know who she is. When the motel’s owner (Andre Royo) explains her story and why so many people seem to loathe her, it touches something in Sweeney; the next time he encounters her, he offers her a job as the motel’s maid in exchange for money and a room. At first, Leslie does her best to blow this opportunity as well. But when it finally dawns on her that this is pretty much it, she makes an undeniably shaky attempt to kick the drinking and straighten up her life, at last, boosted by Sweeney’s quiet support.

The screenplay by Ryan Binaco, said to be inspired by his relationship with his own mother, is familiar. It recalls Tender Mercies, right down to much of its action revolving around a small Texas motel—and the concluding scenes are perhaps a bit too pat for their own good. But for the most part To Leslie does a good job presenting its familiar tale with a grounded, quiet reality and attention to the details and nuances of small-town life that rings true throughout. It does not linger on the more melodramatic elements of Leslie’s tale of woe. And by not spelling every single detail out, what we do learn has a greater impact.

All of the performances are smart and keenly felt, and the two leads are especially good. Riseborough is one of the best actresses currently working, and Leslie shows her at her most impressive. She’s on-screen for virtually the entire film, and while she has any number of great scenes—a standout being a sequence where she confronts one of her local tormentors by pointing out that a) $190,000 is not that huge of an amount of money and b) he hasn’t exactly made much out of his life either—she handles them with a quiet but determined authenticity. Likewise, Maron is very good as the eternally patient Sweeney—a man who recognizes something within a woman he hardly knows. A woman who he, almost alone, feels is worth at least trying to save.

To Leslie is grim going for much of its running time. Some viewers may find themselves so exasperated with Leslie in the early going that they may simply not care whether she redeems herself or not. Those who can work with the picture’s bleakness will be rewarded with a film that is, in many ways, a mirror image of its main character. It’s shaky and aggravating at times, but worth caring for.