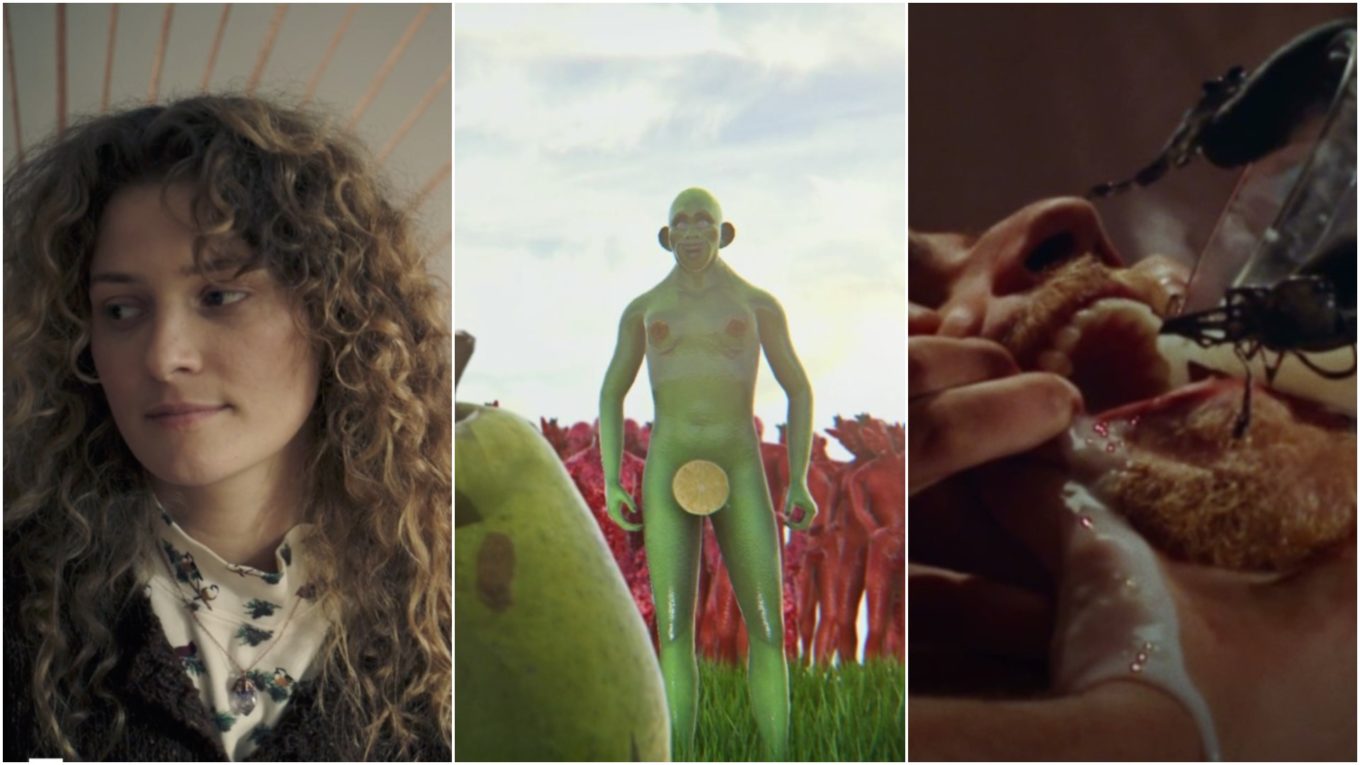 Those who turned on Botanicum Eroticorum during the festival found themselves faced with thirteen short films that played with form, fantasy, and fluids. The collection, which Fantasia describes as a “deep dive into the delightful jungle of emotions and bodies”, is as diverse and odd as any collection of lovers or sexual experiences; some fast or slow, some good or bad, and some playful while others are too serious.

Some of the lovers we’d like to forget include Leah Shore’s Puss, Rock Brenner’s Une facette de l’humanite (Some Kind of Humanity), and Nicole Daddona & Adam Wilder’s Sexy Furby. Each comes with a distinct sense of humor – Shore’s crude horniness, Brenner’s edgelord shock humor, and Daddona & Wilder’s attempts at absurdity – but none manages to elicit any laughter. Their brevity makes them bearable, and there’s room to find some charm in the respective filmmaking styles of each one, but they’re unfortunately forgettable.

Just as forgettable, though more grounded despite an eventual pivot toward playfulness, is Avra Fox-Lerner’s The Lovers. It’s the kind of short that’s too timid for its own good, its ambition at telling what should be a bloody and sexy little story hampered by a limited filmmaking style.

The bolder films within the program were ultimately the most interesting. One such piece, as giddy as it is messy, was Romy & Laure…and the Mystery of the Enchanted Plug. It’s a film told through lovely black-and-white still images that would fit well in a Taschen art book, cut together to tell a story, but it doesn’t hold much narrative weight. As fun and ridiculous as its magical plot can be, its sex is, surprisingly, a bit boring.

The collection…. is as diverse and odd as any collection of lovers or sexual experiences.

Also playing with presentation was Nicole Bazuin’s Last Night at the Strip Club, which pairs a charismatic performance by Andrea Werhun with a delightful documentary aesthetic to explore sex work during the pandemic. Not every gimmick or character the filmmaker and actress go for works, but her charm and willingness to discuss the highs and lows of pandemic sex work go a long way.

Ilja Rautsi’s Night of the Living Dicks is, without a doubt, one of the highlights of the collection. Reminiscent of the way Bertrand Mandico pays tribute to a variety of storytellers while crafting original work in his short films and The Wild Boys, Rautsi offers a silly mix of John Carpenter, Guy Maddin, and Franz Kafka with this. Its commentary on gender may be shallow, but there’s something pleasant about watching a filmmaker indulge in the absurdity of glasses that reveal how men are literally giant dicks (complete with wonderful effects work). It is committed to the bit through and through and all the better because of it.

Two of Botanicum Eroticorum’s most gorgeous productions are George Pedrosa’s Macho Carne and Michael Portnoy’s Progressive Touch. Pedrosa’s film is what I’d like to see more of in queer filmmaking these days, in touch with the way artists like Kenneth Anger and Clive Barker approach the intersection of desire and destruction. It’s about gazing headfirst at both pleasure and pain – at everything from cum guzzling and choking to bondage and blood-play – and beautifully crafted from top to bottom. There’s an intoxicating intensity to it, even when it becomes uncomfortable, though its seriousness is contrasted by the completely wild tone of Portnoy’s short.

Split into three pairings – one with a penis and vagina, one with two penises, and another with two vaginas – Portnoy depicts sex as performance art. It’s a series of exaggerated gestures, each one more amusing to watch than the next, set to progressive rock and math metal. One set piece features lip-syncing into a cock while the next presents the licking of a vagina in time with the music in split-screen. It’s a brilliant, camp little work of art that I could have watched for an eternity.

And then there’s Fruit. Ivan Li’s short film is…something. On one hand, I think it’s a masterpiece of computer animation. On the other, I think it’s pretty much a shitpost. That the filmmaker has been found wandering the festival parties wearing a banana costume and talking about Naked smoothies only amplifies the latter. But the more times I watched Fruit (and, yes, it is the only film in the program I watched not once, not twice, but five times) the more enamored I became with its insane ambition. This is a short film that, within three minutes, cycles through everything from anthropomorphized fruits fucking each other to digital cameos from Samuel Jackson and Quentin Tarantino.

It’s as much a commentary on the way audiences and artists alike fetishize both violence and sex as it is just an assault of stupid colorful imagery and ridiculous punchlines. As off-putting as Ivan Li’s oeuvre might be for some (his short film Finding Uranus likely to be just as divisive), his work is, without a doubt, one of the most exciting things I’ve seen at Fantasia; as genuinely smart and skillful as it is bafflingly batshit.

Juan Barquin is a Miami-based writer who programs the queer film series Flaming Classics, co-hosts the podcast For a Good Time…, and serves as co-editor of Dim the House Lights. You can follow them on Twitter and Instagram. They aspire to be Bridget Jones.