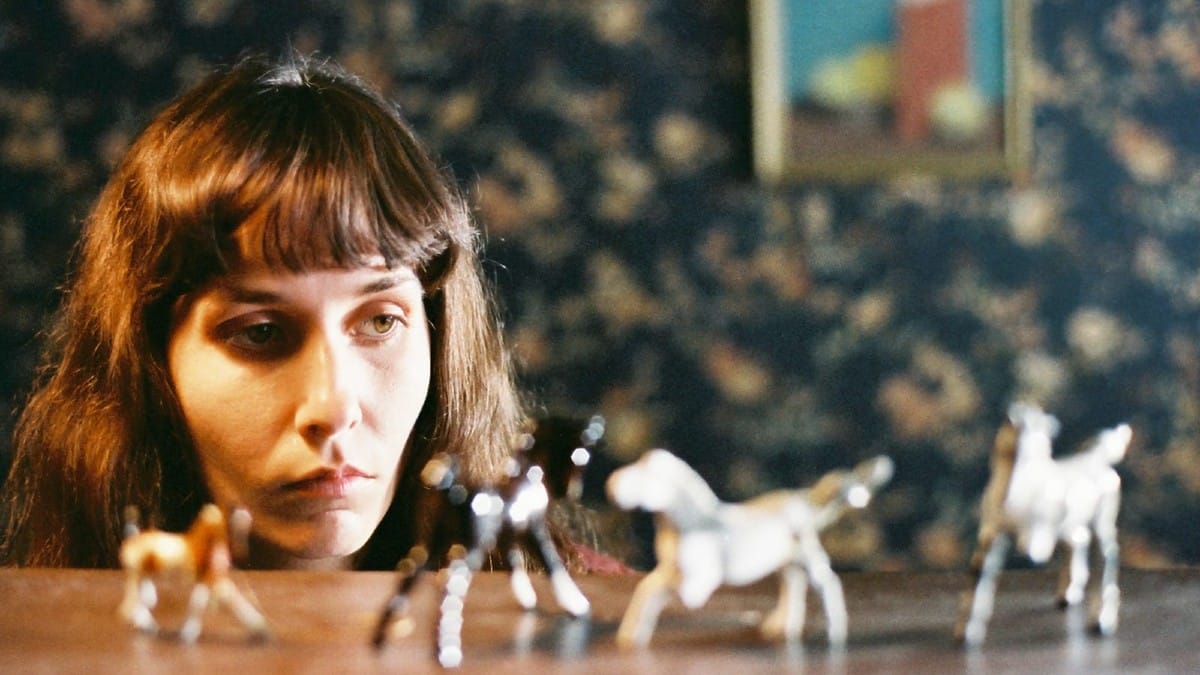 “We had a tree in our yard with a palace in the branches. It was built for my sister and it had fairy lights that went on and off in a sequence. She was the princess. It was her tree, she wouldn’t let me up it. At night the darkness frightens me. Someone could be watching from behind them, someone who wishes you harm. I used to imagine the roots of that tree crawling, crawling right under the house, right under my bed. Maybe that’s why trees scare me. It’s like they have hidden powers.” – Sweetie‘s opening lines

A tree is a perfect central motif for Sweetie, Jane Campion’s theatrical feature debut. Trees are comprehensible but surprising. They mindlessly, inexorably pursue a single goal—grow further—but are remarkably accommodating in how they accomplish it, moving around obstacles, or through them, or sometimes swallowing them whole. This reminds me of Campion’s approach to filmmaking: she comes to every project with a clear idea of what she wants to do and how she wants to accomplish it but seems remarkably open to letting her characters take the story in unexpected directions.

The first half-hour of Sweetie ably demonstrates Campion’s light touch: its central character, reticent Kay (played by Karen Colston), seems perpetually unsure about the direction of her life, and the film is happy to follow her as she reaches out to things and tries to find meaning in them. She goes to a fortune teller, which leads her to a fall in love with a man, Louis (Tom Lycos), who tries to plant a tree symbolizing their love, which she pulls up by the roots, which leads to their spark drying up and them trying different things to get it back.

There’s a focused aimlessness to these scenes that will be familiar to anyone who managed to get through their 20s without making a serious commitment to a job, cause, group, or person, and Campion is happy to follow Kay along through the ups and downs, finding the romantic ecstasy in an unexpected car park encounter, switching to an experimental stock-footage montage when Kay gets really into meditation.

And then her sister Dawn, aka Sweetie (Genevieve Lemon) barges into the movie, along with her vague aspirations to fame, her drugged-out boyfriend/manager, and a personality like a black hole—pure gravitational pull without the consolation of any light. Caught in Sweetie’s orbit is their father, Gordon (Jon Darling), who indulged Sweetie too much when she was little and couldn’t stop indulging her as she grew until ultimately she could never be indulged enough.

These new characters feel like something out of the Marx Brothers, or possibly John Waters, a parade of ne’er-do-wells charging onto the set and doing rude things with the scenery. It runs through the film like an electric shock, and the funny thing is, it seems to revitalize Kay as well. We get the sense that this is a common pattern in her life and that as tired as she is of her sister’s antics, on some level she’s more comfortable playing the supporting character in Sweetie’s latest melodrama than being the focal point of her own.

Previously, Campion had directed the TV movie Two Friends, which also focused on the relationship between two girls, one wayward and headstrong, one retiring and intelligent. Two Friends shares some other characteristics with Sweetie, namely a love of ensemble set-ups that place every character in the frame, and an off-kilter way of regarding a scene.

The result is what I’ve come to regard as Campion’s signature storytelling device: strong-willed characters seem to grab the plot machinery and yank it out of joint, defying our expectations while also helping us to understand them better.

The difference is that in Two Friends, the off-kilter perspective is schematic: the 1986 TV movie beats Memento to the punch by 14 years, moving chronologically backward over a series of short segments, so we see the dissolution of a friendship in reverse. But Jane Campion isn’t Christopher Nolan; her films are not a maze through which she steers her characters. Instead, she and frequent collaborator Gerard Lee follow them, keeping an eye on what happens.

The result is what I’ve come to regard as Campion’s signature storytelling device: strong-willed characters seem to grab the plot machinery and yank it out of joint, defying our expectations while also helping us to understand them better. Sweetie’s arrival blows up everything the first half-hour of the film seemed to be setting up, and yet for these characters, this usurpation makes sense: Sweetie has bent and warped everything within this family toward her, and Kay tries to hide away little private things that can be her own, which Sweetie eventually finds and either consumes or destroys (or, in the case of Kay’s little porcelain horses, both).

It makes sense that this pattern is represented in the movie as well, and it clarifies Kay’s behavior in the opening half-hour: haunted by the memory of her sister’s enormous treehouse, she can’t set down roots of her own. Her fight to remain her person makes it difficult for her to let anything into her life to the degree that true intimacy requires.

None of this would work without the right actress for Sweetie, and Genevieve Lemon is an absolute force of nature. Anyone who has had a Sweetie in their family understands that part of the impetus for their actions is an inability to shut off or slow down, a need for something to always be happening. Observe Sweetie right before she goes to town on Kay’s porcelain horses. “I’m getting upset, I’m going to do something, I’m really going to do something!” she growls. When Kay doesn’t back down: “Alright, that’s it! I’m gonna do something now.” Lemon gets that Sweetie, as feral and instinctive as she may seem, is always at heart performing for an audience, wringing reality around and around until she can craft a narrative in which she is at once the persevering hero and the put-upon victim.

And all this is before getting to the troublemaking neighbor kid, who seems to be the closest thing Sweetie has to a peer, or Kay’s mother, whose excursion to the outback comes through the movie like a cool breeze, but that is my point about Campion’s approach to these characters: rather than imposing a narrative structure on them, she follows them wherever they go and asks what they have to show us. The result is a film as unique and surprising as the people who made it.