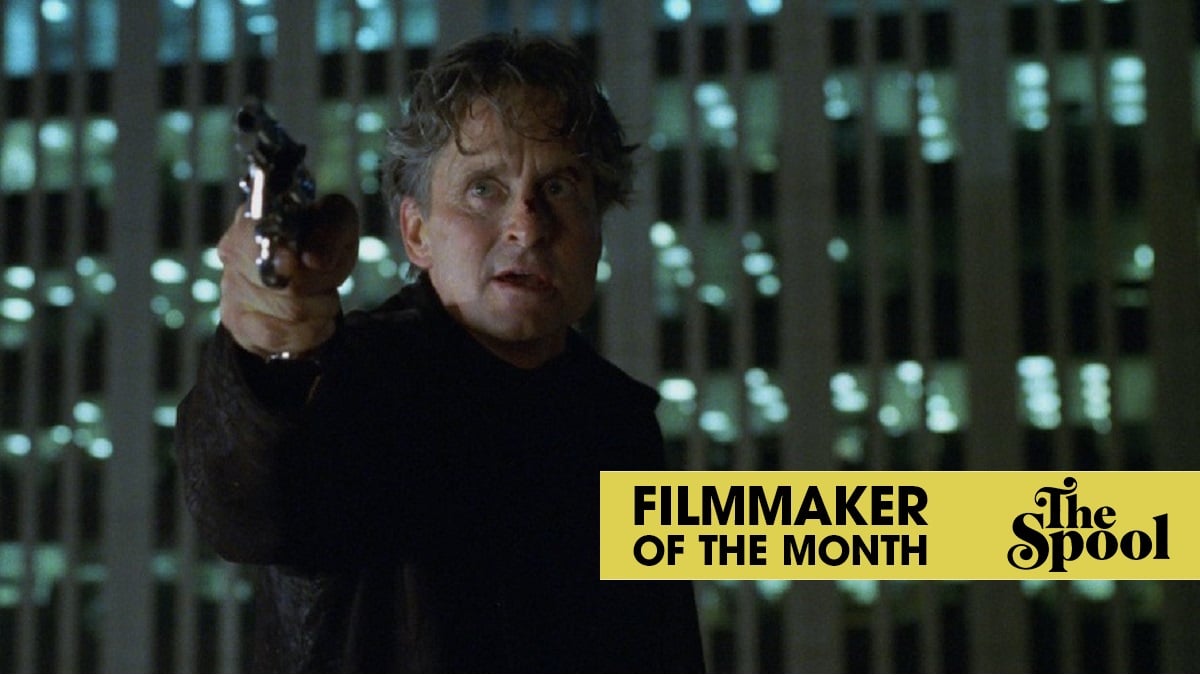 “What do you get for the man who has… everything?”

Sean Penn‘s Conrad Van Orton asks this early in David Fincher‘s The Game of his older brother, the aloof, cynical Nicholas (Michael Douglas). But he might as well ask it of Douglas’ other iconic businessman, Gordon “greed is good” Gekko of Oliver Stone’s Wall Street, a role that lends a surely-intentional metafictional wrinkle to Fincher’s third film. The Game is an oft-forgotten artifact of Fincher’s career, a third film sandwiched awkwardly between his true breakout in Se7en and his pop-culture sensation Fight Club. But looking back on it now, it’s one of the man’s most assured tales, a clockwork thriller that turns all of Fincher’s detail-oriented obsessiveness into a surprisingly emotional tale of catharsis and dark nights of the soul. Think of it as Gordon Gekko’s Christmas Carol.

Instead of Christmas, The Game is centered around birthdays – Nicholas’ birthday, in fact. Before Fincher allows us to soak in Harris Savides‘ crisp, ink-black photography (one of the most gorgeous films he’s ever shot), he treats us to grainy, 16mm footage (a moment that HBO’s Succession would mine for its effective titles) of one of Nicky’s most memorable childhoods. It’s memorable, but not in a good way: it’s the day his father would jump off the roof of their palatial estate, killing himself.

It’s an image that haunts Nicholas to this day: even as a rich, successful San Franciscan investment banker, imperious and misanthropic as he chases the almighty dollar, there’s a hole there that no amount of money can fill. He’s divorced, bitter; his most positive relationship is with the family’s maid, Ilsa (Carroll Baker). His birthday has come around again — his 48th. The same age his father was when he died. He’s terrified he’ll end up the same way.

But salvation comes in the unlikely form of Penn’s Conrad, an estranged younger brother who’s shirked the family fortune and burned bridges long ago, who drops in with a curious birthday present – an invitation to something called Consumer Recreation Services. “They make your life fun,” Connie says. After some self-reflection (and the tacit approval of a group of fellow finance guys extolling its virtues in his vicinity), he decides to give it a try. And soon, the game’s afoot, whether he likes how far it goes or not.

Much of the fun of The Game is solving the puzzle right along with Nicholas (as the oh-so-obvious title cards, which break up into jigsaw pieces, allude), Fincher’s exacting style carrying us through every cog in the Rube Goldberg-esque machinery screenwriters John Brancato and Michael Ferris set up for us. What is the Game? Is it a con? Are its dangers real? Who can Nicholas trust? What, if anything, are his mysterious hosts even after? And most importantly, when will it stop? “Discovering the object of the Game is the object of the Game,” says a virtually-recreated version of finance anchor Dan Schorr to Nicholas; he might well be talking to the audience.

But of course, we’re not Nicholas Van Orton — we don’t have maids, or servants, or millions of dollars to leverage in hostile takeovers of our family friends’ companies. As much as we’re lured into the mysteries of the Game, we also scrutinize Nicholas himself, a man as emblematic of the toxic excesses of American capitalist culture as that other suit-wearing ’80s guy Douglas is so fond of playing. Nicholas is Gekko if he was driven to the same manic excesses as another iconic Douglas character, D-FENS in Falling Down, two men who played the game America told them to play and found themselves deeply dissatisfied in one way or another. It’s one of his finest roles, running away from (or towards) every new danger with a dancer’s grace; his physicality as an actor is one of his most underrated qualities.

Technically, The Game is one of Fincher’s finest, an ode to Hitchcock that sidles nicely alongside his later Panic Room (starring Jodie Foster, who was at one point attached to this film). CRS itself functions neatly as metaphor for the artifice of filmmaking — casting actors, building sets, tweaking the twists and turns of a screenplay for maximum emotional impact — only they’re playing for an audience of one.

Over the course of the film, we see Nicholas lose everything: his crisp suits, thousand-dollar shoes, his fortune. Even his sprawling estate is tagged with black-light graffiti as “White Rabbit” blares (a cheeky bit of hippie-on-yuppie violence). His only real ally is the working-class waitress (an alluring Deborah Kara Unger, who shares a real Cary Grant-Audrey Hepburn thing with Douglas) thrown into the adventure with him after he gets her fired for a clumsy mistake. We relate to Nicholas’ sense of peril, but also find catharsis in seeing a man so insulated from the concerns of the real world taken down a peg. Yes, he needs to learn his lesson and honor Christmas in his heart and try to keep it all the year, as Scrooge would say. But in this respect, the Game is just as much for our enjoyment as it is his catharsis.

Of course, by the end, it’s all truly just a game — albeit one that stretches convenience and credulity to the point it could only happen in the movies. As he reaches the climax, a triple-fakeout involving smuggled revolvers and an office building roof, Nicholas will fall just as his father did, a psychological metaphor as potent as it is obvious. But just as with so many of the 1%, there’s always a golden parachute: the roof he crashes through is covered in breakaway glass, his fall cushioned by a large safety mat. He’s safe, cared for by the rich friends and family who show up for his birthday even after he’s burned all their bridges. The Game may have seemed deadly, but there was always a way out.

But one line from Conrad, blood-soaked and holding an “I was drugged and left for dead in Mexico and all I got was this stupid T-shirt” T-shirt, lays bare the film’s entertainment value for us, the audience: “I had to do something, you were becoming such an asshole.” The game, for Connie, is both revenge and release, therapy and intervention. He’s the Jacob Marley of this particular Christmas Carol. Ostensibly, the hope is that Nicholas will learn to be a better person, someone more grateful for the gifts his family’s wealth has given him.

Think about it further, though, and The Game‘s sentimental ending suddenly develops a wry smile, one that fits nicely in Fincher’s ongoing cynicism about the unbridgeable gaps between rich and poor. Even after everything he’s gone through, he’s still got his money and all the power in the world. What we’ve seen is little more than pauper cosplay, the high-stakes equivalent of wearing Urban Outfitters when you make seven figures. And that’s what curls the monkey’s paw of Fincher’s deliciously cynical thrill ride — even as we watch someone being played, we the audience are being played as well. Even when we see the strings, we pay for the puppet show all the same.