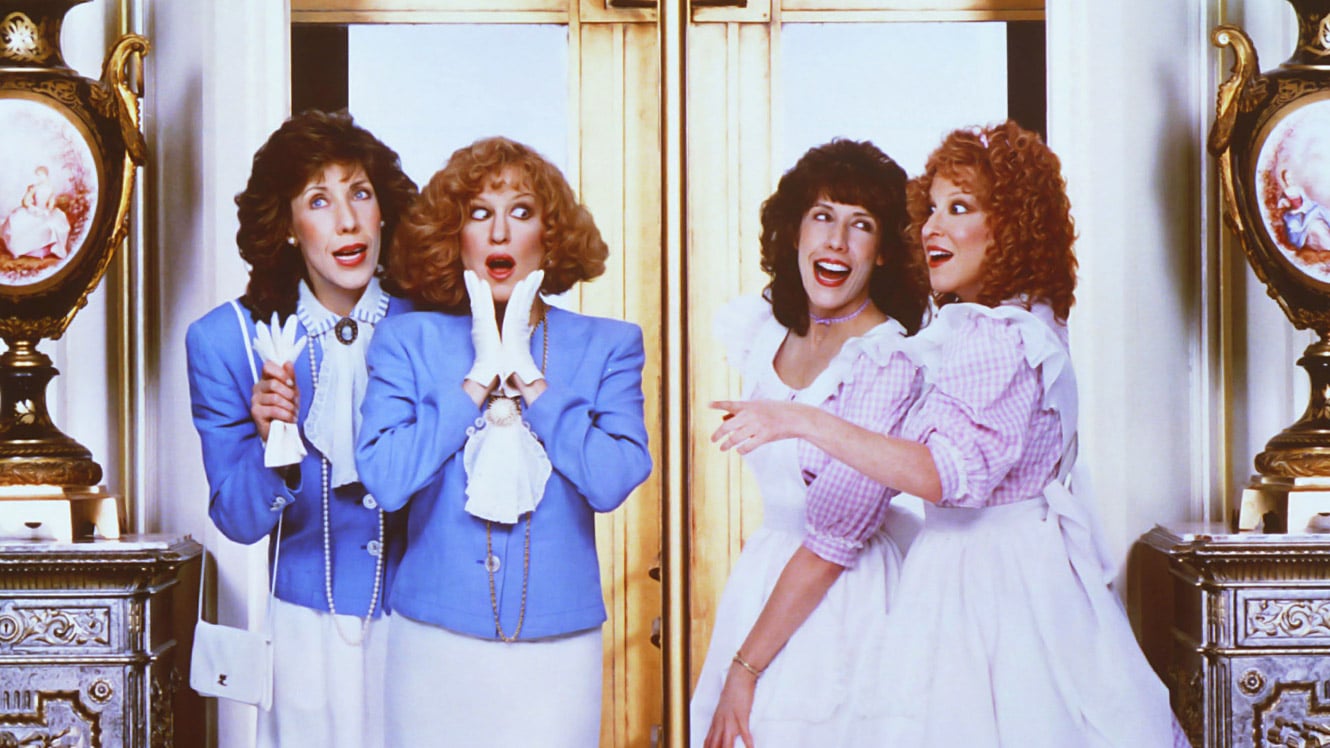 Is 1988’s Bette Midler/Lily Tomlin comedy Big Business (1988) going to be a text taught in the revolutionary underground? Absolutely not. The subversive elements in this film are safe and don’t really threaten the capitalist world order with any sort of bite because this movie isn’t terribly concerned about having a message. But for young audiences, it may percolate some revolutionary questions.

Jim Abrahams‘ film features Midler and Tomlin as two pairs of twins, Sadie and Rose, who were mixed up by a confused country nurse. One set (the Sheltons) lives in New York, while the other set (the Ratliffs) remains in the small town of Jupiter Hollow, West Virginia. (But for the purposes of this piece, we’ll call them City Bette, Country Bette, City Lily and Country Lily.) When the treacherous City Bette decides to liquidate the factory in Jupiter Hollow her company owns, Country Lily and Country Bette come to New York to confront her at the stockholders meeting, not knowing they were about to encounter their identical twins.

There are romantic interests for each woman, of course, a tweenage Seth Green plays City Bette’s rascal son, Sly, and the film does earnestly expects you to fall in love with a down-home professional putt-putt player. But other than that, the movie is fully focused on showcasing the amazing talents of its leading ladies. Mistaken identities occur and it all builds up to the moment worlds collide in the women’s bathroom of the Plaza Hotel.

I enrolled myself in the Bette Midler School of Life early. I was obsessed and it really started with this movie. In studying her movies, I learned how to carry myself, how to camp myself, how to be bawdy, and how to tell a whole bunch of sex jokes I was too young to understand. I learned how to be strong watching Bette. City Bette is a proto-Miranda Priestly figure, one of the early templates for the corporate bitch we love to watch and hate. As sharp as her shoulder pads, she has a fully embodied self-confidence and a camp ferociousness that is infectious.

If City Bette was who I wanted to be like, then Country Bette was who I was growing up, though I have never yodeled with a cow or steel drum band. (Yet.) Country Bette, because she is cut from the city cloth, yearns to be a part of the big city, to be glamorous, to see a world larger than the one she’s known.  Like Country Bette, I often prayed an alien abduction would save me from my pedestrian town and take me away to someplace exciting, someplace I could fit in and wear press-on nails.

Like me, Country Bette also informs how she acts in the world with what she sees in media, specifically Dynasty. There’s a tripled vision, as we learn while watching Country Bette who herself is learning while watching. If Big Business has one profundity, it is the meta-overlay when Country Bette is forced to assume the identity of City Bette and uses a Joan Collins monologue from Dynasty to make a business decision.

This moment suggests that venture capitalism requires a degree of performativity, a lovely bit of camp that points to ways rhetoric and performance are used as business currency — a currency that can be fabricated. It’s the only real dangerous threat to capitalism we get.

But there’s a political heart to Big Business in Lily Tomlin, specifically Country Lily.  Because of the aforementioned aspirations of getting out, I never gave much thought to either of Lily Tomlin’s characters.  They seemed pathetic, meek, and limited in their worldview. As I grew older, I came to see this was far from true. Country Lily is a grassroots labor organizer determined to keep big business away from her home. She raises funds to represent her town at the stockholders’ meeting that will determine the fate of the town, conducts an undercover smear campaign, and maintains an unwavering belief in the power of rural community labor. Though played for laughs because the film was made by known anti-union juggernaut Disney, Country Lily out snakes ‘em in the end by using capitalism’s self-interest against itself. (Tsss!)

Because of some magical innate rural biology, City Lily wants a quiet, domestic life, the film often portraying her as hysterical or “wispy” — which has the effect of making her the least human of the four sisters.  Hers is the least captivating plotline, because she’s the cowardly lion who miraculously gains courage in the final act. Tomlin finds what she can to make her city character something special, but comes up short (since neither the other sisters nor the script like her much at all).

Tucked in amongst all of these shenanigans are Graham (Edward Herrmann) and Chuck (Daniel Gerroll), the assistants to the City sisters, and duly-appointed love interests. After they think they’ve completed their task to find and distract the dissenter sent from Jupiter Hollow, they retire to their room together.  Roone (Fred Ward), the lovable putt-putt player from Jupiter Hollow, asks if they are going to sleep together, to which they say “yes.” He then asks if the kimono Chuck is wearing was bought in “[Viet]Nam.” Chuck replies, “No. Fire Island.” The next morning Chuck is nude reading the paper in bed. That is all that is ever shown about their relationship.

Graham and Chuck taught me how to read movies as a baby queer viewer. (Queer baby viewer?)  They’re the first example I can think of that signaled to me that a lot of queer language and behavior in cinema was subtle, under the surface, spoken in code that needed to be deciphered. “Fire Island” was more than an answer; I had to learn how to read between the lines and images to see myself and my people.

I’m not sure if all this is what my parents had in mind when they rented the movie for me one night in my youth.  I was a visibly queer child early in my life — certainly by 3rd grade, if not before. Bette Midler movies like Big Business were my parent’s quiet way of communicating their love for (and acceptance of) me.  They knew there was a culture, a canon outside of what I would find in a middling Illinois city. So they did what they could to help me participate.

Twins also hold a spectral space in my family.  I lost an identical twin in childbirth, so motifs of twins have always hit a little sour. Yet, for a time, Big Business marked out 97 minutes when I could fantasize about my loss just being the result of a mixed-up nurse, a comedy of errors. Maybe I would run into my twin in a New York City Hotel someday, and we’d walk out of the hotel as Steve Winwood played us into the credits.

I think about this a lot; I constantly have people telling me they know someone who “looks just like me” or is “lol totally my twin.” Big Business helps this feel less maddening, even comical. That is the film’s most indelible lesson: the uncanny is both horrifying and hilarious. The uncanny can camp and reveal revolutionary suggestions about how the world works.

I’m not saying Big Business made me a queer leftist, but it definitely primed me to become one. When looking at how we develop psychologically, we should look at nature, nurture, and the movies we watch as children. It all matters; it matters to me just as it does Country Bette.

Big Business has given me a lot to be thankful for over the years, even things I was startled to find when returning to reexamine it critically. It planted seeds that grew into larger questions about economics, sexual and gender identities, and the power of movies.