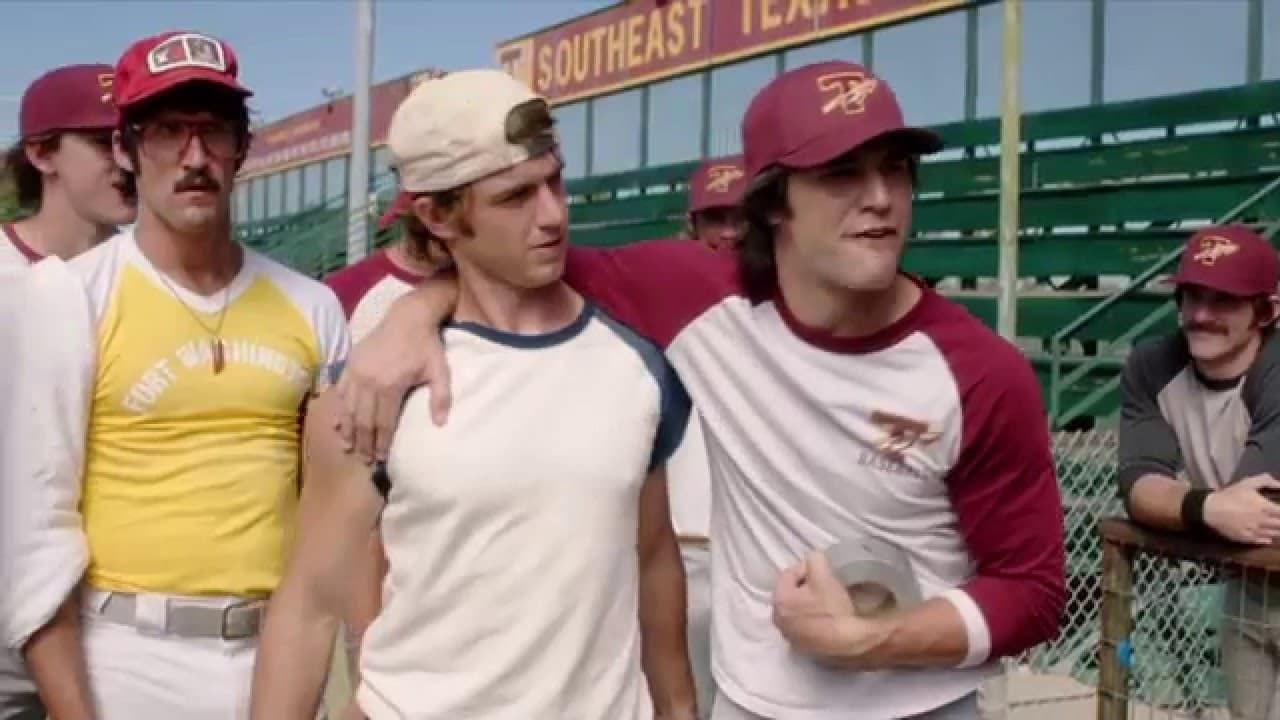 Leave it to Richard Linklater to make a comedy about the everyday adventures of a college baseball team in 1980 that is as concerned with its heroes’ search for self-actualization as it is their quest to get laid. From many other filmmakers, this would be, to say the least, a bizarre turn. For Linklater, it makes perfect sense. Everybody Wants Some!! is by design a lighter-hearted and easier going tale than its immediate predecessors Before Midnight and Boyhood.

However, even though it’s first and foremost interested in having a good time and sharing that good time with its audience, it’s got a fair bit more on its mind too. It’s many things. It’s funny as hell. It’s precisely the right amount of raunchy. It’s got a darn good soundtrack. It’s a further study of time from a filmmaker eternally fascinated by the subject. For the purposes of this here essay though, Everybody Wants Some!! is first and foremost a celebration of the ways that baseball teaches folks to move through the world and a salutation to accepting and embracing one’s passion as a way to embrace the world.

Everybody Wants Some!!’s main characters are baseball players. This is critical to the ways in which they perceive the world and the ways in which the film perceives them. Since the movie is set during the earliest days of the season, we only get to see the team take the field once – for a season-launching, on-paper voluntary, in-practice mandatory batting practice. Linklater and company make the most of this sequence. They highlight the team’s deep dedication to the craft of their game, quietly contrasting their united focus on the field with their freewheeling antics elsewhere. The ensemble (which includes real-life former baseball player Tyler Hoechlin) move with care and power. Linklater and cinematographer Shane F. Kelly emphasize not only the skill with which the team moves on the field, but the ways they process the mental component of the game.

On a philosophical and thematic level, the batting practice scene lays out the lessons to be learned from the game. For Linklater, himself a former ballplayer and long-time fan of the game, baseball’s richness lies in its contradictions. It demands the sharpest of focuses at some moments and an uncanny knack for laying back at others. It requires great dedication to oneself as an individual athlete and equal dedication to the team working as a whole. And even the greatest players in the game’s history are, by its very nature, going to fail constantly. To understand and accept these contradictions and quirks is not only necessary to play baseball well, it’s a darn good how-to guide for navigating the everyday.

Baseball doesn’t just unite Everybody Wants Some!!’s hypercompetitive team in a shared desire for victory. It serves as a crucible that highlights each player’s own strengths and failings. It is during the batting practice that rampaging egomaniac and self-proclaimed “Raw Dog” Jay Niles (Juston Street) is decisively humbled and first-year point of view character Jake (Blake Jenner) demonstrates the strength of his character.

Niles’ obnoxious, insecure certainty in his own greatness drives him to pitch as aggressively as possible, even though the purpose of batting practice is to practice batting, not rack up strikeouts. Fed up with Niles’ cruddy behavior on field and off (earlier on he single-handedly manages to get the entire team thrown out of a disco), team captain Glenn McReynolds (Hoechlin) promptly hits an out-of-the-park homer off Niles. As Niles deflates into a hairball of ineffectual anger (Street does a beautiful tantrum), McReynolds delivers a pointed chewing-out. From the word go, Niles has been a selfish putz. He hasn’t viewed his teammates as rivals to compete with, but enemies to be crushed. He’s given the people he shares a life and a team with just cause to detest him. The fact that he’s not quite the baseball god he sells himself as just makes the above all the more infuriating. Niles, to his credit, gets the message and lightens up once he’s calmed down.

What we do with the innings, in failure, in triumph or otherwise, is up to us to decide. We are both one part of a greater whole and ourselves – and both of these aspects need care

Jake, by contrast, is acutely aware that he has a lot to prove, both to the team and to himself. As he notes, he and his teammates were all the best players on their high school teams. Now they’re surrounded by peers who are at least as good as they are – and often quite a bit better. Jake himself faces this fact when he has to pitch against McReynolds. The older man gets a hit off of him with little trouble. Once safe on base, he gives Jake a pointed but not malicious “Welcome to college ball, freshman.” Where Niles pitched a fit, Jake is both mature and self-assured enough to accept McReynolds’ quip and the meaning behind it. He knows that he’s good – he wouldn’t be on the team at all if he wasn’t. But for his own sake and the sake of his teammates, he’s going to have to push for more than good. He will fail – as he did when McReynolds got a hit off of him. And that failure cannot be the end. The game will go on and the world will turn.

Jake accepts this, and even embraces it. During an early-morning conversation with Beverly (Zoey Deutch), the theater major with whom he shares an attraction, Jake talks about an admission essay he wrote relating baseball to the myth of Sisyphus. Paraphrasing, he says:

“…It’s a gift to be striving at all, you know, even if it looks futile to others… That’s where I tie it into baseball… What matters is just getting in that groove where the whole world kind of goes away, and I’m just doing what I’m supposed to be doing.”

Beverly, building off this, says in response:

“I feel the same way about performing. It’s putting yourself out there in art, in life, just participating. Having the guts to look fucking stupid. It’s kind of beautiful isn’t it? That we get to feel passion in this world, you know, about anything.”

The day, Everybody Wants Some!! argues, will be the day. What we do with the innings, in failure, in triumph or otherwise, is up to us to decide. We are both one part of a greater whole and ourselves – and both of these aspects need care. So, quoting Bruce Lee, through Everybody Wants Some!! Linklater argues that the solution is to “be water.” Remain oneself even as you move and are moved by the world. Engage with what you love. There are innings yet to be played.

Everybody Wants Some!! Trailer: