Every month, we at The Spool select a Filmmaker of the Month, honoring the life and works of influential auteurs with a singular voice, for good or ill. In honor of Black Women’s History Month, we’re taking the opportunity to put a spotlight on black women behind the camera – directors who broke through systemic barriers to bring their singular perspective to some of cinema’s most intriguing works.

Zora Neale Hurston is known by many as the author of the 1937 classic novel Their Eyes Were Watching God and, more recently, her 2018 work of nonfiction Barracoon: The Story of the Last “Black Cargo.” Less known is her work as an anthropologist whose extensive field research included a collection of ethnographic films.

Many of Hurston’s films were recorded while in her hometown, one of the first self-governing, all-black incorporated towns in the United States. There she captured footage of the daily lived experience of the Black residents, from children playing outdoors to folks gathered at their porch, and other moments in-between. Hurston’s folkloric documentation of the everyday life offers a visual representation of Blackness in the south in the early twentieth century that is rivaled by few in its ability to capture to honest, raw quotidian.

In Mama’s Baby, Papa’s Maybe: An American Grammar Book, Hortense Spillers, a Black feminist scholar and literary critic, offers a thoughtful analysis of black kinship and radical intimacy as they relate to “a locus of confounded identities, a meeting ground of investments and privations in the national treasury of rhetorical wealth” during and in the afterlife of slavery (Spillers, 65). Spillers’ grammar illustrates the ways in which the black body, black flesh, and black life converge at a crossroads marked by pain, overcoming, and a complex network of competing gazes.

This method of analysis is comparable to what Autumn Womack describes as “governing the possibilities for what it means to see and be seen” when she examines the “visual grammar” of Zora Neale Hurston’s ethnographic films (Womack, 117). The use of the language and logics of grammar to give life to a study of Blackness reveals the countless barriers to intelligibility and the varied limits of artistic or rhetorical mediums to adequately showcase truths. Jump at the Sun, a 2008 biography about Zora Neale Hurston, brings to light those barriers and limits with respect to the work of Hurston and the creation of the biography itself. In attempting to document the life and work of Hurston, work that “has been widely acclaimed both critically and for its moving celebration of African-American life”, the filmic biographers represent a postmodern Icarus jumping toward a Hurston yellow dwarf only to realize the impossibilities of the task. Director Samuel Pollard, like Spillers and Hurston, present an attempt at truth telling that is “open-ended and unresolved” (Womack, 119).

One could argue that Pollard and Hurston knowingly directed their works with an eye to themes of uncertainty. One could also argue that both attempted to showcase (a) life and body of work that approached truths as nearly as possible. “I am not tragically colored,” the viewer hears as Jump at the Sun first begins, words mouthed by Hurston herself that Pollard chose to introduce the film with in order to slowly engage the viewer with the “cosmic Zora”. From the Fire literary magazine to the lightning painted on Hurston’s back during a magical experience in Louisiana to Zora’s “claims on the moon”, both Pollard and Hurston highlight what it is like to, as Franz Fanon explains, lose one’s id in the heart of the cosmos.

I place Fanon and Spillers in conversation with Pollard and Hurston in order to shed light on the painfully difficult task of reimagining, deconstructing, and combating the network of gazes each works to act against. Both Spillers and Hurston create with mixed mediums to tell an unfolding story of post-Middle Passage black life. An other-worldly, cosmic journey marked by an artistic and rhetoric space that the “disquieting lacunae that feminist investigation seeks to fill” (Spillers, 73); an “‘objective’ record for future use and for analysis” attempted by Hurston and documented carefully by Pollard (Charnov, 43).

While Hurston reveals the limits of the technical medium of film, Pollard reveals the limits of the biography. In doing so, both showcase the delicate nature of truth, the fickle nature of interpretation, and the evolving nature of consumption.  As a result, the advice of Hurston’s mother to cosmic Zora makes sense: Jump at The Sun. The “sun” to Hurston is the phenomenological reality of quotidian black life; the “sun” to Pollard is the phenomenological reality of Hurston’s artistic life.

Both may have missed the mark, purposefully or otherwise, but they also craft an intelligible grammar of untruths, an ever-unfolding story of the search for truth that renders claims of truth an act of futility in the face of flux. Pollard cleverly incorporates Hurston’s myriad projects in a way that subtly draws attention to the supernatural thematics of her mixed media corpus. Cosmic Zora incorporates the elements of nature into her life and work effortlessly be it via nomenclature of projects or mantra. Whether jumping at The Sun or making claims on the moon, Hurston shows, by way of example, what an untragically colored life is like in both film and “real” life.


Whether jumping at The Sun or making claims on the moon, Hurston shows, by way of example, what an untragically colored life is like in both film and “real” life.

Whereas Spillers claims in writing that “different cultural text actually reconfigures, in historically ordained discourse, certain representational potentialities for African-Americans”, Hurston showcases through film the ways in which representational potentialities are limited by artistic mediums that turn lives into subjects (Spillers, 80). Further, Pollard translates these reconfigurations and limits into a fragmented narrative impacted by the many degrees the artist is removed from the truth.

In drawing “attention to what the cinematic apparatus cannot do”, Hurston provides Pollard with a framework within which to document Hurston’s own life and artistic, intellectual journey as filmmaker, raconteur, participant observer in her own ethnographic creations. Pollard offers the viewer a trip through cosmic Zora’s rich landscape of uncertainty-fueled exploration and curiosity-driven storytelling that “brings into focus a gathering of social realities” (Spillers, 68). The commitment to honesty outweighs the commitment to truth and fuels both Pollard and Hurston’s trip toward The Sun. 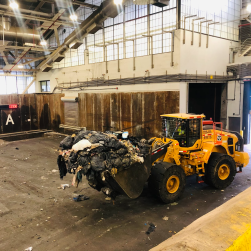 Latest posts by Jesi Taylor Cruz (see all)
Liked it? Take a second to support The Spool on Patreon!